FC UNITED of Manchester are dreaming of European adventures after the NPL club signed up for the inaugural FENIX Trophy.

The competition, brainchild of Brera Calcio owner Alessandro Aleotti, will bring together eight non-professional clubs from across the continent.

Running from September until May, FENIX will see two groups of four play home and away fixtures followed by a finals weekend in the Italian coastal resort of Rimini.

“Regular trips to Europe have been part of our supporter culture at Manchester United and tales of trips to St Etienne, Rotterdam, Turin, Barcelona, Leipzig and Hamburg are the stuff of leg – end,” said.

“Big United were, of course, the very first English club to play in the European Cup, in 1956, and, 65 years on from Matt Busby’s European trailblazers, it’s perhaps fitting that FC United should create our own little bit of history as the first English team to compete in a new European football competition.

“So it’s time to have a rummage in your bottom drawer and dust off those passports as we look forward to three Euro away days, a finals weekend in an Italian seaside resort and our first ever midweek European matches under the lights at Broadhurst Park.”

In addition to FC United and Brera, a seventh-tier Italian side based in Milan, the tournament will feature teams from Warsaw, Hamburg, Valencia, Amsterdam, Rome and Prague.

AFC Door Wilskracht Sterk, the historic rivals of Ajax, were Dutch league champions in 1964 and boast Ruud Gullit and Frank Rijkaard among their former players.

Roman side Lodigiani, meanwhile, once played in Serie C1, where they gave breaks to future internationals Francesco Totti and Luca Totti. 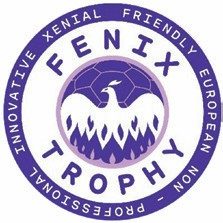 At yesterday’s draw, FC United were paired in a group with Brera, AFC Door Wilskracht Sterk and Polish side AKS Zly.

The statement added: “Aside from football the FENIX Trophy will also be about extending the bonds of friendship between clubs from several European nations and, in the process, allowing clubs from across the continent to share best practices within non-professional football. In short, it aims to build a European network of extraordinary non-professional football clubs.”