THERE will come a time this season when David Norris is driving home late on a Tuesday night, with a motorway closed after a defeat, wondering why he’s still doing it.

Then he will wake up the next morning, drag his creaking body out of bed and begin a day of work.

But the following evening he will be at training again, laughing and joking with his teammates and leading by example on the pitch like he did as a professional with Plymouth Argyle, Ipswich Town, Portsmouth, Leeds United and others.

At 40 years old, Norris still can’t bring himself to hang up his boots.

“There’s probably six times a season where I’ll quit on the spot in my head,” said the Lancaster City midfielder. “But then I get over it pretty quickly and think, ‘let’s go again’. “Everyone will say I do it every year, that I’m not sure whether I’ll do another season, especially in the last three or four years, but once it’s gone, it’s gone.”

Norris is fortunate that, unlike many other ageing players, injury hasn’t pushed him over the edge to retirement.

He has barely any cartilage left in his right knee – surgery in 2013 played its part – and a heel injury – Plantar Fasciitis – almost did end things at Blackpool three years later.

Norris is a rare case of a player out-lasting their career life-span, still playing for enjoyment and not financial gain.

When the curtain was beginning to fall on his time in the professional game at Blackpool, he set up his own personal training gym studio.

Former players often struggle to adapt to life after football and Norris didn’t want to be another.

“If I didn’t have it I would have struggled, I struggled mentally anyway finishing professional football,” he said, having also been working – and sometimes training – part-time as a strength and conditioning coach at AFC Fylde since last season. “The gym kept me busy, I got used to taking classes and it was good for me because that was what I was into. 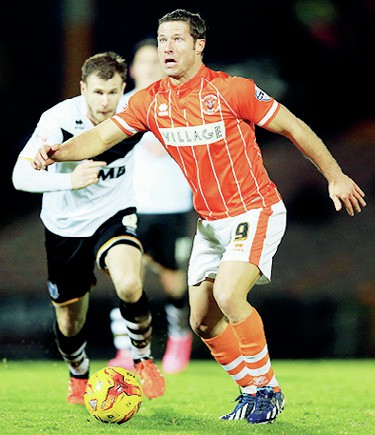 “I had played over 30 games in League One for Blackpool. I was thinking even if I drop down surely I’ll go to League Two, I should still be alright.

“The heel injury kept me out for six months until January. You’re 36, you haven’t played or trained anywhere, you’ve been injured, it was hard.”

It seemed an easy route for his career to come to an end, but having started in Non-League at Stamford and Boston United, a return to the semi-professional game didn’t faze him.

A very brief spell with Jimmy Bullard at Leatherhead was followed by half a season at Salford City.

Then a stint at Shaw Lane followed before a Boston homecoming until the travel became too much.

Now, based in Bolton, Norris has been loving the team bond at NPL Premier Lancaster during the past two-and-a-half seasons.

“The thing that’s kept me going is the changing room,” he said. “There’s a great bunch of lads there, no egos and we have good banter.

There’s a couple of experienced players still knocking about. It’s kept me motivated, hungry and I’m still enjoying it.

“It sounds like a cliché because everyone does say it – that they’ll miss the changing room – but, especially as a pro, it is your life, day-in, day-out.

“That’s definitely kept me going and motivated, I love going in. They’ll banter me, they don’t care where I’ve come from or what I’ve done or anything, which I love. That camaraderie and banter in the changing room is key.”

Lancaster expect to be challenging for a spot in the Northern Premier League’s top six this season – and Norris admits he wouldn’t still be playing if it wasn’t at a club with ambition.

How, though, is he still the same box-to-box midfielder that he was in the Football League, and one of the fittest players at the club according to manager Mark Fell, at the age of 40?

“I wasn’t technically the best player but I was fit,” he said. “If I wasn’t going to beat them with skill, I could at least run over the top of them. I always wanted to be the fittest wherever I went. I never had any pace so I haven’t lost any!

“We still wear the GPS vests at Lancaster and my stats aren’t that different to when I was playing as a professional. That was my game.

“I’ve always looked after myself but the wear and tear… I’ve played a lot of games over a long period of time and there were only a few injury periods.

“With the way my game was, I was 11km, 12km, 13km a game. I thought I’d probably run out of steam eventually and see me off with injuries.

“The only thing I’ve noticed in the last year or two is the recovery. I’m going into work on a Monday trying to show someone something in a personal training session and I can’t move!”

It was under Steve Evans at Stamford and then Boston at the turn of the millennium when Norris got his big break into the Football League at Bolton Wanderers.

Over two decades later, he is getting ready for another season which still might not be his last.

“I didn’t want to finish on two bit-part seasons,” he added. “I’ll go this one and see how I feel but I’m never going to say never.”