BEN PRINGLE says he turned down interest to stay in the Football League in order to join Phil Parkinson’s revolution at Altrincham.

The 33-year-old winger has played the majority of his career in the Championship with the likes of Derby County, Rotherham United and Ipswich Town having been spotted as a 21-year-old at Ilkeston Town.

And the left-footer, inset, released by Morecambe in the summer, said there was no doubt in his mind that Altrincham were the club for him.

“The big positive for myself was finding a team and manager who believed in me and the way I wanted to play,” Pringle told the club’s website.

“The team’s style is the play football and keep possession and that was a massive plus for me.

“I had a bit of interest from League clubs but I spoke to the gaffer at the start of July and I just felt that the style of play and what the club is trying to achieve was the main factor. The last two years have been a bit stop-start for me so it’s about playing football and enjoying it again.”

Parkinson said of his new acquisition: “Ben’s acquisition will add vast experience, creativity and quality. He’s proven and still hungry, and he wants to help us achieve our goals. I’m really looking forward to seeing him in Alty colours in the National League.”

Elsewhere, Lois Maynard reckons everyone at Solihull Moors are “singing from the same hymnsheet” after joining on a season-long loan from National League rivals Stockport County. 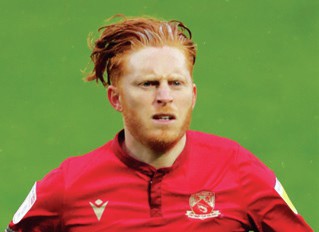 “I’m absolutely delighted to get it over the line,” same the 32-year-old former Salford City midfielder. “I wanted to go and get some games under my belt, so I’m excited for the season.

“The aspirations and the challenge is something I’m totally up for and I think everyone’s singing off the same hymn sheet here.”

Eastleigh boss Ben Strevens has been busy this week, making an impressive triple swoop of midfielders to bolster his Spitfires squad aiming for a play-off place.

FC Halifax Town have bolstered their attack with the signing of striker Jordan Slew.

The former Sheffield United prospect, 28, joined then-Premier League Blackburn Rovers as a teenager in 2011, for a reported £1.1 million.

Slew had spells in Non-League in recent seasons with Radcliffe, Boston United and Ashton United before a move back into the EFL with Morecambe last year.