KEVIN Maclaren believes if his Chertsey Town can topple Southend United then it would eclipse all of their achievements in recent years.

The Curfews player-manager has led the club into the FA Cup fourth round qualifying for the first time in their 132 years.

They made history by coming through a tough tie at Jersey Bulls 1-0 last Sunday and were then rewarded in the draw by pairing National League club Southend.

“I don’t think we could have got a bigger club in the Southern side of the draw,” Maclaren told The NLP. “I wanted someone at home, one of the teams at the lower levels but we’re over the moon with Southend.

“It’s an opportunity to go to a club with loads of history and in front of a big crowd but it’s also an opportunity to play a team who aren’t in a good place right now. They’ve had relegations and not a good start to the season whereas we’re the opposite to that. There will be a giant killing that week and why can’t it be us? We definitely believe we can do it. We’ve done some special things over the years but I think beating Southend would top everything.”

Maclaren captained Chertsey to the Combined Counties Premier title and FA Vase success in 2019 before taking over the management reins from Dave Anderson.

He’s still yet to complete a season in charge having been on course for a play-off finish in the last two Isthmian League South Central campaigns.

His start in the dugout, coupled with still playing in midfield, has been impressive and their win at Jersey Bulls typified his impact.

“We had them watched twice and they were really impressive,” said Maclaren whose side are unbeaten in the league. “We knew it was a big task going over there even though they are a Step below us.

“We left no stone unturned. We went there on the Saturday night and trained. I understood the importance of going there the night before. A lot of teams would travel on the day and then have a night out afterwards and look at it as more of a social side. We went out there with one aim which was to progress.

“Our chairman (Mark Turner) was brilliant. We spent a lot of money to make sure the preparations were right, the food in the hotel, coaches to and from the training venue. It all ran like clockwork and I think it played a massive part in the result.”

Maclaren says he is the fittest he’s ever been having started in their last four matches and looks set to play once more at Southend.

The 32-year-old admits he would ideally like to solely focus on coaching and management but still laces his boots up because he brings an element to the team that he hasn’t been able to replace.

Maclaren is left with plenty of thinking time during his commute from Blackburn to the Surrey-based club – and wants to make more memories.

“I said to the boys before the season I wanted to make history again by taking them the furthest they’ve gone,” he added. “We’ve achieved that but we want more now, we want the TV cameras down and want to get into that first round proper, be on the highlights, Match of the Day, that’s another thing the club hasn’t experienced.” 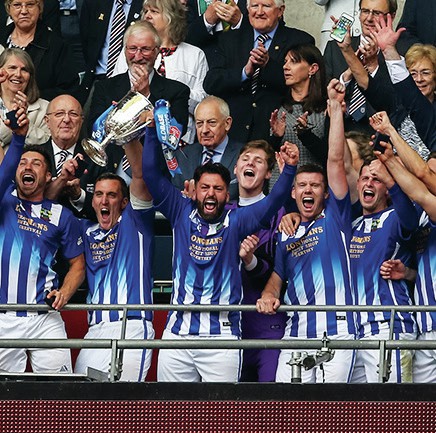