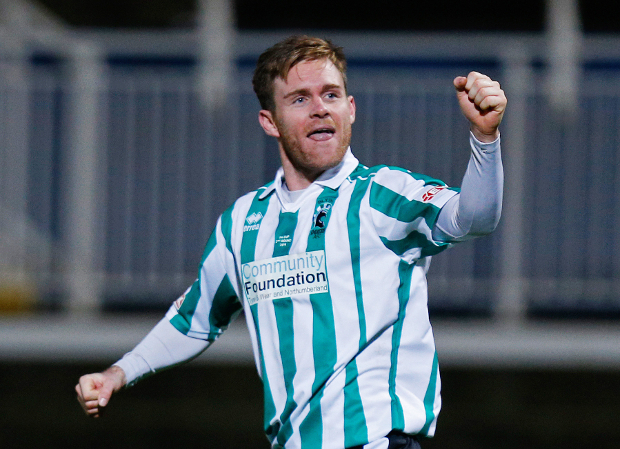 Ex-Blyth Spartans midfielder Stephen Turnbull has been named as Morpeth Town boss after Nicky Gray brought the curtain down on his highly successful reign, writes The NLP’s Mark Carruthers.

Gray has led the club to four promotions, a Northumberland Senior Cup win and their historic 2016 FA Vase Final win over Hereford since he was appointed in 2011.

But despite his decision to step down, his time with the Northern Premier League outfit will continue as the takes up a newly-created role at the club.

The move means that Turnbull, pictured, will now get his managerial career underway. The rookie boss will have two familiar faces alongside him in the dugout after the Highwaymen confirmed that assistant manager Jon McDonald and coach Craig Lynch will remain in their positions.

The club can confirm that manager Nick Gray has stepped down from his role after nine seasons, to be replaced by Stephen Turnbull.

Get reaction from Gray, Turnbull and chairman Ken Beattie in the article below:https://t.co/gN62A74sbn #Highwaymen pic.twitter.com/C5RC0bCvJx

The surprise reshuffle was announced on Friday night when Gray confirmed that he had initially taken the decision to end his time as Town boss earlier this year.

He explained: “It was February time when I thought about stepping down and had conversations with Ken Beattie (Morpeth Town chairman) and after two or three weeks I had made my decision to step down.

“What I didn’t take in consideration is how the season would sadly end and it wasn’t the ideal situation.

“I genuinely believed we would have at least finished in the play-offs and then who knows how the season would have finished?

“It isn’t ideal timing, but who would have predicted Covid-19 happening and hopefully we are now over the worst, which has sadly taken so many innocent lives and affected so many households.

“Both on and off the field, Morpeth has changed massively over the nine years with a lot of hard work from a lot of people who have the club at heart.

He continued: “But I believe for the club to continue to go forward, it needs help from more.

“I keep mentioning the word “club” because for me that is the most important thing.

“I can hand on heart say that in everything I have done for ‘the Peth’ since day one, I have always given my all and done things which in my opinion was the best interests for Morpeth.

“I have had some disappointments, but the achievements wouldn’t have happened if we hadn’t learned from minor setbacks.”

And he will now get his reign underway with the support of his former boss after Gray urged the club’s supporters to get behind their new manager.

Gray said: “Now is a new chapter for Stephen Turnbull to take the reins and I wish him every success in the future and hope he has much success.

“He is a very knowledgeable, passionate, hungry lad that will make a success of it and he will need the backing and support of everyone when he will have the odd bad day.

“That’s the important time that everyone needs to get behind him.”

For much more news make sure you get your copy of The Non-League Paper this weekend!