Posted on 8th August 2020 by admin in Latest News, Southern Leagues with 0 Comments 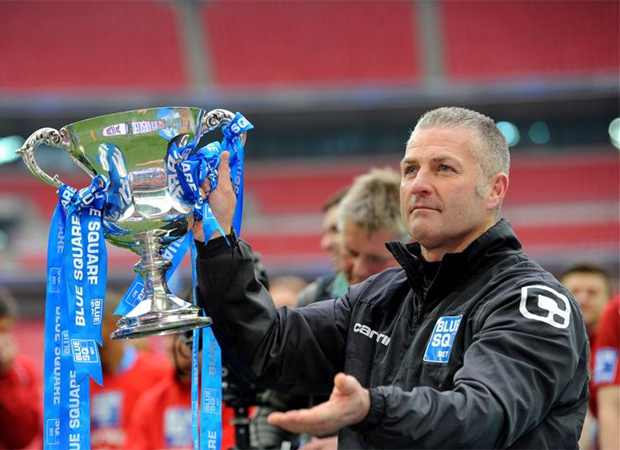 The Nottingham Forest legend and former Derby County, Leicester City and Seattle Sounders midfielder and his long-term number two Darren Gee were unveiled by the Steelmen on Saturday morning before taking training for the 2020/21 Southern League Division One Central season.

The 58-year-old, who played for the likes of Brian Clough, David Pleat and Neil Warnock, took the Ministermen back up into the EFL in 2012 via the National League’s play-off final at Wembley, pictured, as well as twice winning the FA Trophy in 2012 and 2017.

Mills, who spoke to The NLP for this weekend’s edition before taking training, succeeds Tommy Wright, the ex-Nuneaton Borough, Darlington and Stratford Town manager. He called time on his second spell last month before it had hardly begun, blaming work and family commitments for resigning within weeks of returning and forgoing a two year deal.

New manager Gary Mills speaking to the players before training this morning.

A statement from the Steelmen read: “Corby Town are delighted to announce that Gary Mills will be the club’s new first team manager. Gary will be assisted at the club by his long time assistant manager, Darren Gee.

“Everybody at Corby Town would like to welcome Gary and Darren to Steel Park.”