Time to finally put my feet up! Non-League legend Tim Sills bows out after 20 years 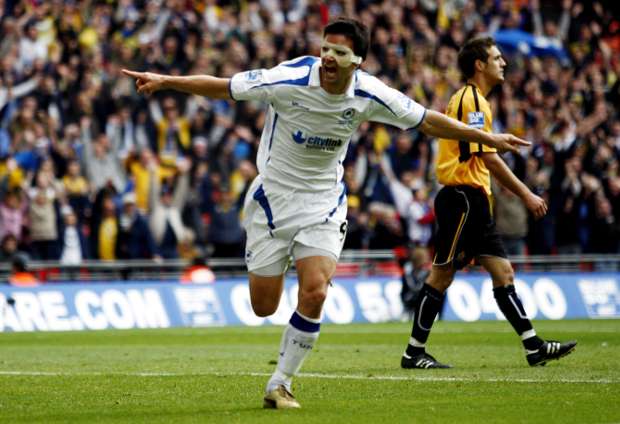 DECORATING, gardening or a stroll round B&Q might not be everyone’s ideal way of spending a Saturday afternoon, but for Tim Sills it actually sounds rather appealing.

The 37-year-old has finally hung up his boots after a glittering 20-year career – so who can blame him for wanting to put his feet up and enjoy a sense of normality.

Since first pulling on his boots as a fresh-faced 17-year-old for Camberley Town in 1997, Sills has gone on to establish himself as one of Non-League’s finest, reaching three Wembley finals and enjoying Football League success with the likes of Oxford, Hereford, Torquay and Stevenage, scoring well in excess of 200 goals along the way.

It’s fair to say the 6ft 2in striker deserves the pipe and slipper treatment – even if wife Hannah has other ideas!

“I remember looking out of the coach window on our way to various away matches, watching people sat in their gardens or walking down the street thinking how nice it would be to have the choice to do whatever you wanted on a Saturday,” he told The NLP.

“I’m going to enjoy it for the next few weeks but no doubt I’ll get itchy feet when the season starts and the missus gets me doing the decorating or gardening!

“It’s the first season in 20 years I haven’t had a pre-season to contemplate – and I don’t miss it, to be honest. I’ve never been a big fan of pre-season so it’s nice not having to think of all that running around.”

Sills still has fond memories of his breakthrough match for Camberley – a historic FA Cup tie at Griffin Park, Brentford in November 1998 which he claims helped ‘turn him from a boy into a man’.

“I remember watching the draw in the bar at St Blazey where we’d won our fourth qualifying round match and everyone going mental when we were paired with Brentford.

“We took 1,000 fans down to Griffin Park that day, it was such a great experience to be involved in, even though we lost 5-0. It gave me a taste but I never thought for the life of me I would go on to have the career I had.”

After free-scoring spells at Basingstoke Town and Kingstonian, Sills found himself sitting at Non-League’s top table with Aldershot Town and helping take the then part-time club to the 2003-04 Conference promotion final, only to be agonisingly edged out on penalties by Shrewsbury Town.

Sills’ time, however, would still come, finally fulfilling his dream of becoming a professional footballer when signing for Oxford United in 2006 before ending up back in the Conference with Torquay via an unhappy spell at Hereford.

It was with the Gulls, however, where he would go on to enjoy, arguably, his happiest days, becoming the first Torquay player in 44 years to register back-to-back 20-goal seasons with his crowning glory being his infamous man-in-the-mask goal in the 2009 promotion final against Cambridge United at Wembley which sealed a Football League return.

After a season at Stevenage and loan spell at Rushden & Diamonds, Sills returned to former clubs Aldershot and Basingstoke before a brief stint at Gosport Borough earned him an unexpected Wembley return in the 2014 FA Trophy final.

Player/coach spells at Weymouth and local club Blackfield & Langley curtailed his career, so having gone full circle by starting and finishing his career at Step 5 does Sills believe that lower-league football has evolved for the better over two decades?

“It’s certainly changed quite dramatically in that time,” he reflected. “At Camberley, none of us were on any money, yet we all used to hang out in the bar together after a game. We had such a great team spirit.

“Nowadays, in many instances, that seems to have gone with players upping sticks and leaving for a few extra quid.

“It’s a shame really but I suppose that’s football in this day and age.”

DIY jobs aside, Sills’ focus is now on the development of his nine-year-old son Ethan, who is currently playing at AFC Bournemouth’s Academy, and his students at Poole High School, where he works as a PE teacher.

So, with so much still going on, is there any room for a future career in coaching or management?

“I’ve not ruled it out, but it would have to be the right job at the right time,” Sills added. “I enjoy coaching and it’s fantastic being in a career where I can make a difference to young people and help give them the opportunities I had.”