Posted on 21st December 2017 by admin in Featured, Features with 0 Comments

PLAYING starring roles in the Football League and latterly in Non-League, Maidstone’s midfield dynamo Stuart Lewis has experienced the highs and lows of a proper lower league footballer…

So Stu, you are known as one of the lively characters in football…

Yes, I would agree with that, as you know from our time in Finland together with England C. I love training and playing and I think my enthusiasm for the game has shone through on and off the pitch over the years. It has definitely played a big part in my career.

We’ve had a few battles in the middle of the park but who has been your toughest opponent to date?

I’ve had numerous tough battles. Nicky Bailey, at Sutton United, is a fierce competitor. We both enjoy a tackle and the occasional verbal, but I think there is a mutual respect between us.

After a successful period at Wycombe, what was your reason for dropping two leagues to national league south Ebbsfleet united?

In the harsh world of football these days and with only six months left on my Wycombe contract, Ebbsfleet made me a financial offer that I could not refuse. With their ambition to reach the Football League I decided that was the path I was going to take. Looking back, I’d say it was a good move – I won player of the year in my second season and it also gave me the opportunity to pursue my coaching career at Spurs Academy.

Like myself, you don’t tend to find the net too often but of the handful of goals you’ve scored, what was your best?

You won’t believe this but I scored a last-minute equaliser with my left foot into the top corner for Wycombe against Carlisle in League One April 2012. My most important goal was for Maidstone last season to make it 2-1 in a must-win game against Barrow. It was also the first goal to be scored in front of the new stand.

You signed for Maidstone permanently in the summer of 2017, How are you finding it there?

It’s been a brilliant 12 months for me at Maidstone – I’ve enjoyed every moment! There’s a real togetherness throughout the club from the chairman, manager, fans and players. Jay Saunders gave me the opportunity to play in January, his management style and character has been perfect for me at this stage of my career. The support is different class, the best I’ve come across. The club has moved to the next level of professionalism, training three mornings a week, and this reflects on the signings we have made this season; Joe Pigott, Zavon Hinds, Magnus Okuonghae, and Jai Reason – all with vast Football League experience.

What’s it really like playing on 3G artificial turf?

I’ve had no issues injury wise playing on 3G surface, I think it’s only a matter of time before the Football League allows them to be used in Leagues One and Two.

How do you prepare for a Boxing Day game on Christmas Day?

Christmas is one of the busiest times of the year for footballers. I’ve only trained once on Christmas Day, when I was at Gillingham. I normally go out for a jog Christmas morning to get my legs going – people look at me like I’m mad! It’s then home for Christmas dinner with my family then look forward to the game on Boxing Day! It will be strange celebrating Christmas Day like everyone else does in a few years’ time.

I’ve been lucky enough to have had a long career playing at various clubs and I have made so many friends, who I still keep in touch with. We had a special group of lads at Wycombe in the 2010-2011 promotion to League One – Leon Johnson, Danny Foster, Matt Bloomfield, and Ben Strevens. At Maidstone I sit next to the old-timer Lee Worgan on away journeys who is a top bloke and I have a lot of time for. Jack Paxman would be a huge favourite with the female audience on Love Island! 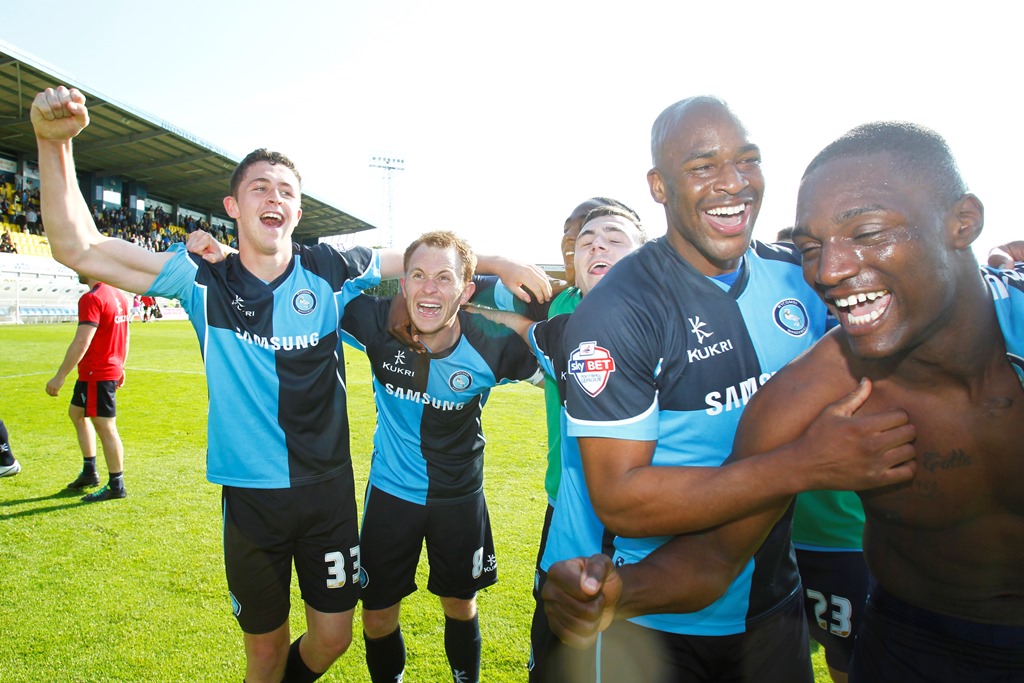 I recently completed my UEFA A license and currently manage Tottenham Hotspur U13s. I’d like to stay in football after my playing days (hopefully there’s a few years left in these legs yet!) to pass on my experience and knowledge to players so they can go on and have as much enjoyment as I have had from the game.

Do you have any regrets in football?

If I’m honest. The only regret I have is signing for Dagenham & Redbridge in League One in 2010-11 season when I could have joined Wycombe. It didn’t work out well for me personally there but I have the upmost respect for John Still as a man and as a manager. Luckily, Gary Waddock came along and took me to Wycombe on loan three months later.

Well as I’ve got to keep it clean…I’ll tell you this one. Stevie Bannister, our kit man at Wycombe who didn’t stop telling us that he used to be the kit man at Chelsea where he worked with his ‘best mates’ Jose Mourinho’ and JT. He would lay the kit out every Friday morning for Saturday’s game, each player with his individual precise pile.

I used to look forward to every Friday where I’d go into the kit room and mix up every piece of kit and scatter it around the room. This became a weekly ritual so Steve started to lock the door, but didn’t realise I had a spare key. Of course I never admitted it was me, he knew who was behind it though! We are still friends to this day. I bet he doesn’t miss me!