In 1976, a young Paul Doswell watched his beloved Southampton lift the FA Cup which remains the only major honour the club has won.

Forty years later, Doswell was raising the cup himself, albeit not after a Wembley final, but at Sutton United.

On Tuesday, the famous trophy was brought to the club by The Football Association as the U’s prepared for tomorrow’s fourth qualifying round tie at Evo-Stik Southern League club Paulton Rovers.

Eight months on from that fifth round defeat against Arsenal, watched by over seven million at home and a lucky 5,000 on the Sutton terraces, Gander Green Lane stood still as the players jogged out for training.

Not much has changed at the ground on the face of it but the £710,000 they earned from the run has been an incredible boost for the National League club.

In one corner sits a new electronic scoreboard while high above the pitch, box fresh LED floodlights overlook the plastic surface. Inside there’s further changes. 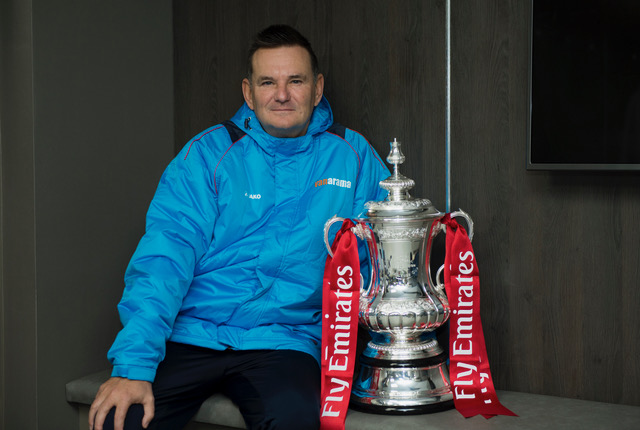 Arsene Wenger’s side were brought down to earth at Sutton’s cozy dressing rooms but they are now no more.

“We’ve got fantastic new ones now, home and away,” explained Doswell. “They desperately needed doing, they’ve been like that for 30/40 years.

“There’s new academy changing rooms, new flooring everywhere and turnstiles. We have 100 boys in the academy, playing and being taught on site.

“One of the main jobs for the summer is to build a pavilion with four new changing rooms and classrooms which will also then turn into a hospitality area on a Saturday.

“We’re also going to refurbish the bar. Once we’ve done those two jobs, that’s pretty much the money spent. The pitch has also been repaid. These things would have taken us years and years to achieve. To be able to do it this year is a great thing for the future of the club.”

Now Sutton’s FA Cup journey begins all over again and the magic is still very much there for Doswell.

“One of the highlights of the year, as a Southampton supporter, was going to the first FA Cup games,” he recalled. “We grew up thinking it was a very special competition, having experienced what we did last year, it’s even more so now.”

Catch up with all the weekend’s FA Cup Fourth Round Qualifying action in Sunday’s @NonLeaguePaper.