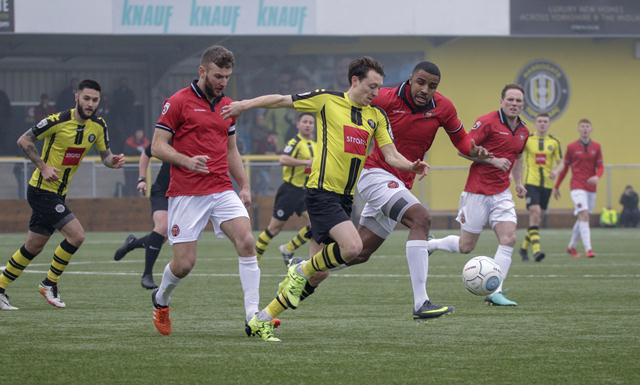 FC United of Manchester will play in the National League North for a fourth consecutive season after securing a hugely impressive 1-0 victory against play-off chasing York City last night.

The Reds moved seven points above the drop zone as Connor McCarthy’s second half goal gave them victory at Broadhurst Park.

FC United, who are the largest fan owned club in the country, were formed in 2005 by a number of dissatisfied Manchester United fans. They began life in the Second tier of the North West Counties Division but quickly rose up the Non-League pyramid, reaching Step Two after winning the Northern Premier League title in 2015.

The club finished in 13h position in their first two seasons in the National League North, however they suffered a disappointing start to this campaign, taking just 11 points from their first 14 league games. This poor start left the club second from bottom of the table at the end of October and prompted a decision to part company with manager Karl Marginson. The decision was not taken lightly as Marginson had been in the dugout for The Reds since the club’s founding in 2005.

Under the stewardship of new manager Tom Greaves fortunes have dramatically improved for FC United and the Manchester club will be hoping to build on an impressive second half of the season ahead of their next campaign.