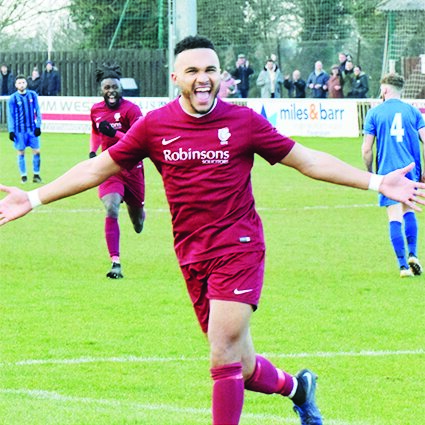 Canterbury City have certainly had a topsy-turvy few weeks.

Moments after edging past Leicester Nirvana to reach their first ever Vase quarter-final, the club were rocked by the news that the local council had rejected their proposals for a new stadium, which would have ended 12 long years of nomadic life.

“One of the papers hit the nail on the head with the headline, joy to despair in the space of just four days,” said chairman Tim Clark.

“We are ground sharing at the moment and I think everyone knows that without a new stadium our future will be in jeopardy.”

With relations between the club and the city council at breaking point, innovative direct action is now being planned.

Taking inspiration from the Valley Party, which was formed by Charlton Athletic fans in 1990 in an attempt to pressure Greenwich Borough Council into allowing the Addicks to return to their home ground, Clark has revealed that several campaigners are preparing to run in May’s local elections.

“We have been continually let down by the council and we are acting to save the club,” he added.

“We are not just campaigning for this single issue and are asking for more sports and recreational facilities to be developed across the area. It is strange to have all of this going on in the midst of what is the most successful time in the club’s history.

“It has brought everyone together though and I am sure there will be a great atmosphere next week.”

Manager Ben Smith, though, has his sights firmly focused on the field as the Southern Counties East League side eye a last-four berth.

“I have told the players to just concentrate on what happens on the pitch because we have a once in a lifetime opportunity here.

“On our day we can match anyone. We suffered a huge blow when we lost out captain Laurence Harvey to an awful injury last week but it has made us determined to put in a battling performance for him.”

Canterbury will have their work cut out against a Biggleswade side who have promotion to Step 4 well within their grasp.

Under the guidance of Dave Northfield and Mark Inskip, the Bedfordshire club have undergone a unique but immensely successful brief history.

After enjoying a trophy laden stint as the youth team at Biggleswade Town, in 2016 many of the players opted to join coaches Northfield and Inskip in breaking away from the current Step 3 club.

Starting in the Spartan South Midlands Division One, the newly formed Biggleswade FC cantered to an instant promotion, before reaching the final 32 of the Vase last year.

“Never in a million years did we think it would progress this quickly” Northfield told The NLP.

“Last season we were unlucky to come up against Thatcham, who went on to win it. We could have won the game and it made us realise just how far we had come.”

Despite their impressive league form this season, Biggleswade’s run to the last eight has not been without its heart-in-mouth moments.

“We thought it was all over against Tring Athletic in the third round when it went to penalties,” said Northfield. “We never win penalty shootouts. I think we had lost nine in a row so it is safe to say that I wasn’t exactly confident.

“Amazingly, we came through. If we have finally banished the curse of the penalty shootout, maybe this is meant to be our year!”

VERDICT: The loss of captain Laurence Harvey is a huge blow for Canterbury, especially considering the scoring might of Biggleswade, who have netted over 70 times in the league so far.