Posted on 2nd January 2020 by admin in Isthmian Leagues, Latest News with 0 Comments 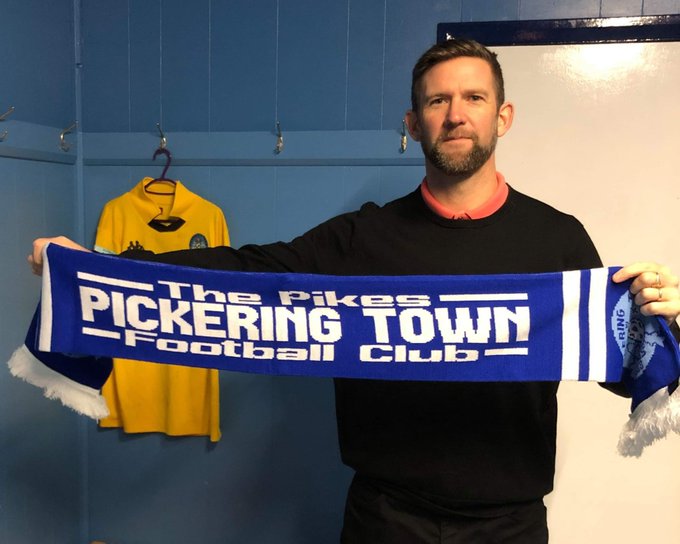 Roberts, pictured, left his role as first team coach at Scarborough Athletic to succeed Denny Ingram at Mill Lane within hours of his predecessor’s departure.

Ingram was sacked on Thursday morning with the Pikes propping up the NPL’s North West Division table after losing 3-0 at home to Tadcaster Albion on New Year’s Day.

Former assistant manager Ingram succeeded Paul Marshall in February after initially stepping up as caretaker following his departure with the club battling relegation.

Arguably the most successful manager in the club’s history, Marshall had guided the Pikes to Step 4 for the first time as Northern Counties East League Premier Division runners-up in 2017/18.

“Steve joins us from Scarborough Athletic where he has been first team coach. He is no stranger to the area or the club having played for the Pikes in the early 2000s. We give Steve a warm welcome to the club  and wish him every success.”

The Pikes also thanked Ingram for his efforts in an earlier statement.

The club said: “The club would like to put on record their sincere thanks to Denny for all his hard work and endeavour whilst he has been manager, but unfortunately football is very much a results game and our results this season have been disappointing.

“We wish Denny all the best for the future. The club will make a statement later shortly as to their intentions regarding a new manager.”

The Seadogs confirmed the departures of their respected coach and wished him well in his first post in their own statement.

The Seadogs said: “Scarborough Athletic would like to confirm that first team coach, Steve Roberts has today left the club at his own request.

“Steve contacted us earlier today to inform us that he had accepted the newly vacant managers role at Pickering Town.

“Whilst we are very sorry to lose Steve from the club, having been a great servant for many years, we also recognise his desire to take the deserved opportunity to step up and manage a club in his own right.

“We would like to thank Steve for everything he has done during his time with the club and wish him well in his new challenge.”