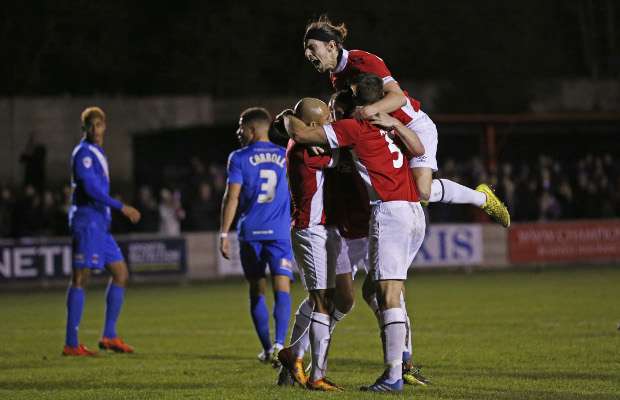 JAMES POOLE wants to get one over on former team-mate Michael Duckworth when Salford City travel to Hartlepool for their FA Cup second round replay on Tuesday night.

The Ammies were unlucky not to win the initial game at Moor Lane last Friday but the club will pocket another £36,000 after the replay was picked for live coverage on BT Sport.

It’ll be the third time Evo-Stik NPL Premier side Salford have featured on TV during this season’s Cup run and Poole is confident it won’t end on Tuesday.

“Being on television is getting normal now, it would have been more of a surprise if we hadn’t been picked!” said the winger, who played 96 times for Pools from 2011-14.

“It’s been a whole new experience for most of the squad and we’ve more than held our own. There’s huge expectation at this club so we’re used to playing under pressure.

“We were a bit frustrated we didn’t win the game at our place – we felt comfortable and knew we could break them down.

James Poole during his Hartlepool days

“They’ve got five or six lads that were there when I played for Hartlepool. Michael Duckworth came from Bradford Park Avenue and I was good mates with him. Hopefully I can get one over on him with the result – we certainly believe we can win.”

They’ve already seen off Notts County and Salford could face another East Midlands club if they make it through to the third round after being drawn at home to Championship side Derby County.

Poole, who works in scouting and recruitment for Manchester City, reckons it will spur his side on.

“It’s as close to a Premier League team as you can get – it would be a huge game and we’ll be really up for Tuesday,”?he added.