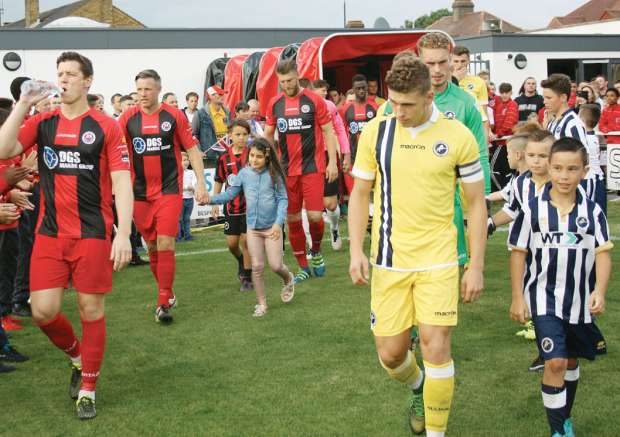 GARY ALEXANDER’S Greenwich Borough squad know all about the significance of the club returning to their own home – they’ve been weeding the terraces!

Boss Alexander has had the paintbrush out himself as the Ryman Division One South newcomers gear up for a homecoming.

Their eight-year absence from the Royal Borough ended on Friday evening with a 3-2 friendly loss against a Millwall XI, who hold Alexander in high regard after he helped fire them to the Championship in 2009.

The ambitious Southern Counties East League champions have moved in with Cray Valley (PM) at the Badgers Sports Ground on Middle Park Avenue.

And the former Leyton Orient, Millwall, Crawley and AFC Wimbledon striker has been busy sprucing the place up. Success

“It’s nice to now have a place we can call home,” Alexander told The NLP. “I’ve been down there all summer. We’ve painted the whole ground in Greenwich Borough’s red and black colours – although there is a bit of green for Cray Valley, who have become our tenants.

“Our goalkeeper Craig Holloway, my dad, and a few of my staff have all helped to make sure the ground looks like home.

“We’ve had a day where all the lads even chipped in. We had a training session in the morning and then all the boys helped out around the ground, did some weeding and things like that, so it’s been a real team effort. It’s nice to see a chairman, a chief exec, and everyone willing to get their hands dirty. It shows the sort of club it is.

“It certainly feels like home and when we start playing here it will even more. To have Millwall and Leyton Orient for our first two games means a lot and shows the hard work is paying off.”

Borough have been sharing with National League South Dartford for the past three seasons, having previously sofa surfed at Erith & Belvedere and Holmesdale.

With a number of high profile summer signings – including Conference title winners Charlie MacDonald and Glenn Wilson – Alexander is hoping the return will boost their support.

“We’re back in the borough so hopefully we can get a few more people through the door,” the 36-year-old said. “Not having our own ground means we haven’t great crowds so perhaps we can put a few more on the gate.

“There are big plans for the club. We’ve got an Academy running, an U21 side, and our aim is to find the next first team players.

“We want to have a club for the locals to be proud of. We’ve just got back but we’re trying to get into the community. We’re going to lose out to Millwall, Charlton, and Palace for kids to do scholarships, but we’ve got scholarships too.

“If they walk away from here with a BTEC and it keeps them off the streets and leads them into the real world, then we feel we’ve achieved something. That’s the club we want to be. “

If we get the next footballing superstar, then fantastic. But we want to help kids in any way we can.”