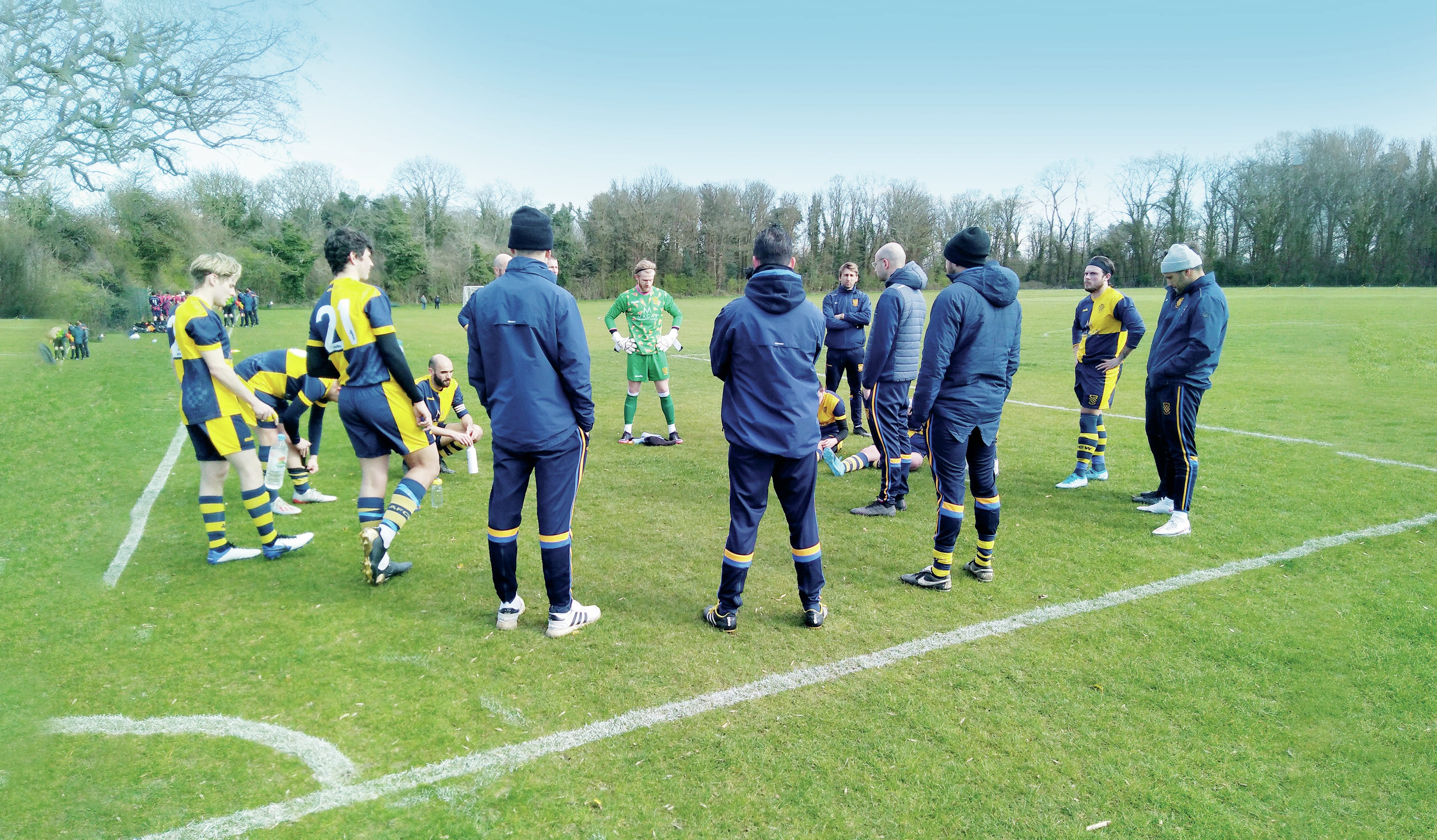 TOGETHER AGAIN! Old Walcountians gather round for their half-time team talk, Kevin Buckler sanitises the goal posts at Wheathampstead

IT WAS time to brush off the cobweks and polish down the boots for thousands of footballers who finally took to the field last week as the grassroots game returned to parks and community grounds as part of the Government’s roadmap out of lockdown.

After a three-month hiatus, outdoor organised football training sessions and matches were allowed to recommence from March 29. And whilst there are plenty of challenges plus strict safety protocols in place, it is hugely welcome news for thousands of recreational footballers around the country.

I travelled to four matches over the Easter weekend to sample a flavour of what this return of grassroots football means to the clubs and the players involved.

And, unsurprisingly, everyone I spoke to relished the opportunity to get back out on the pitch…

A tranquil and tiny village setting located just outside Hitchin in Hertfordshire. As the only fixture in this league on the day, the morning kick-off meant that it was probably the first grassroots football match in the south-east of England since Covid restrictions were eased.

Wymondley FC chairman John Berry told me after the game: “Football during the pandemic has been extremely hard for our club at the best of times in terms of organisation, money, attitudes and so on. Coronavirus has brought a total loss of momentum, direction and a sense of confusion and disappointment for all of us at Wymondley.

“Even leading up to the first lockdown, week after week we were wondering if it was going to be our last game. Then when we came back in August, we realised the limitations of Covid guidance as torrential rain poured down and I attempted to fruitlessly disinfect the goalposts while armed with rubber gloves. Even the referee knew it
was pointless.

“Our team is made up doctors, health workers, airline pilots, teachers, police officers and everything in between.  Some are concerned about Covid. Some are not. Some feel they are young and fit. If you are working long hours in a hospital or in a school with 30 kids around you, playing football doesn’t seem so dangerous.

“Many of our players have been miserable without their fix of football. They just want camaraderie, banter and to escape the boredom of lockdown.

“So far, thankfully, only a handful of the lads have caught Covid. However, a stalwart volunteer at our club who is 43
years old became infected and was put on a coma-induced ventilator for three weeks. He has possible organ damage.

“Even now, most of our players don’t know this as he wants to keep it quiet and not upset the lads.

“But surely they will notice when their perennial clubman doesn’t put the nets up, run the line or wash the kit. To my
surprise, he turned up to watch some of the game today. He has a scar across his neck where they put the tube in. He didn’t look or sound well.”

With that chilling thought in mind, I left Wymondley on a more light-hearted note. The players were taking the goal
nets down and that glorious sight of a grassroots footballer hanging from the crossbar by one hand always makes a great photograph!

From there, it was a 20 minute drive down the A1 motorway to my second game of the day.

On arrival at this busy public park, I spotted the enthusiastic Wheathampstead players carrying their goalposts 100 yards or so from a storage area and carefully placing them in pre-existing holes in the ground. Sanitising spray was also applied to the equipment.

The match itself was a pulsating affair. In fact, one of the most exciting I have seen in a long time.

Visiting team Old Parmiterians led 3-1 with less than half an hour to go. But an invigorating recovery saw Wheathampstead storm 4-3 into the lead. Then, a minute into injury time at the end, a thunderous free-kick into the top left hand corner by Tom Perman of Parmiterians dramatically levelled matters at 4-4.

Wheathampstead Wanderers secretary Kevin Buckler said: “Today felt like a big milestone for the club. The long-awaited return to the sport we all love and the reunion of a large friendship group.

“A few of the players have had some low periods. But they have been hosting online quizzes and fitness challenges to keep morale strong.

“We do not have or seek any shirt sponsorship but our chosen charity partner is CALM. The Campaign Against Living Miserably is leading a movement against suicide which is the single biggest killer of men aged under 45 in the UK. So we are well aware of the therapeutic qualities – physically and mentally – from participating in competitive sport with our friends.

“We had hoped to win today’s game to feel even better but the draw was salvaged by a world class free-kick from OP’s. Indeed, the passion and commitment shown this afternoon was a clear indication of how much players want to play and how much our club volunteers love their roles.”

After a truly fascinating sojourn around the playing fields of Hertfordshire, my weekend progressed with two further grassroots matches in Surrey area leagues.

An interesting trip for me to some finely manicured grounds that sit within a large complex housing the imposing building of The National Physical Laboratory. Believe it or not, this is the Government’s national measurement standards laboratory of the United Kingdom so a very unusual place to watch football.

With some picturesque snow flurries floating in the air and scores of excited children enjoying their resumption of football training on adjacent pitches, visitors Ripley Village ran out 2-0 winners.

NPL FC club secretary Shaun Gibson said: “This hopeful final return to sustained, consistent football is the reward for a lot of hard work to keep the club in a position to offer the game we love to our members.

“There have been times over the past year where it felt this may not have been possible. Reduced income and confusion regarding which Government support existed played a part and the long-term existence of our club currently remains uncertain. But the strong bond and sense of community we have at NPL from managers, players and volunteers shone through during winter nights on video chat. So we are optimistic we can survive this difficult period.

“Now, with the players back together again, it’s a chance to rekindle the romance of the sport we all cherish. A chance to escape back into an environment of different people from different backgrounds but with a common love.

“The excitement for the players to pull back on the yellow and blue of NPL is something that has been building over the last few weeks. It is now a fantastic moment that the white line has been crossed and that whistle has been blown.

“The Surrey Elite Intermediate League has been working hard to establish a competition for us to return to and I thank them for their efforts. I think the restart of grassroots football has given our management and players a clear target. That is something we’ve all needed at times to help focus our collective and personal goals.” 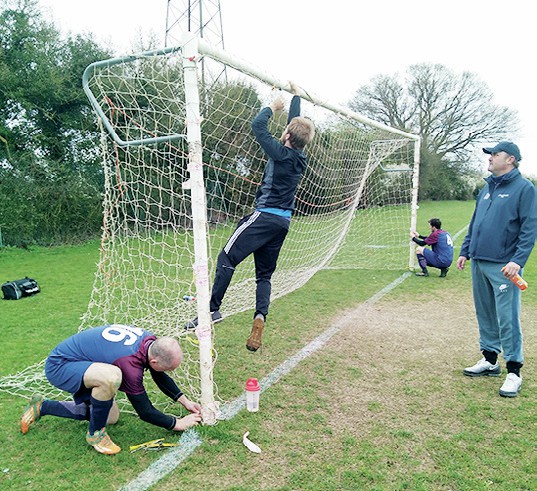 My final port of call on a hectic weekend was a 45-minute drive away.

Another good game with Joe Wornham scoring all four goals for the home team in only his second appearance for the club.

AFC Walcountians chairman Paul Marsh said: “We’re delighted that grassroots football is back after all the restrictions of the last year. It has been tough times for everyone.

“We’ve had various family members and friends who have fallen ill with coronavirus to varying degrees of severity. So the lockdown has taught us how vital football is for the physical and mental health of all our youth and adult players.

“Like all clubs, Covid has impacted our ability to fundraise and generate income from our clubhouse. We hope that normality isn’t far away and that we can all start being able to enjoy the usual social events that help make grassroots sport what it is.”

In conclusion, it was very rewarding for me to visit these clubs over Easter and discuss the issues they have endured throughout the worst health crisis in 100 years.

It is plainly evident that the emotional, social and spiritual support that grassroots football provides is of huge importance as we all look to put this terrible pandemic firmly behind us.