CONNAH’S Quay Nomads made it four points from a possible six against their biggest rivals for the JD Cymru Premier League title, The New Saints, as they played out a 0-0 draw at the Deeside Stadium.

The top two had swapped places in the race for a Champions League place next season when they won 4-1 at Park Hall last weekend. Then they went and lost at Bala Town on Wednesday.

That meant their lead at the top was cut to two points – TNS drew against Caernarfon Town – and the gap stayed the same after a nervy contest. Now the Nomads have three games to go to hang onto their title.

With so much a stake in their final meeting of the season it wasn’t a surprise to see both sides struggle to create chances. George Horan headed home a free kick in the 86th minute, but it was ruled out by the referee for a foul in his jump.

TNS had Danny Redmond sent off for a second yellow card in the third minute of added time and from the freekick Declan Poole fired over the top of the wall and the crossbar. 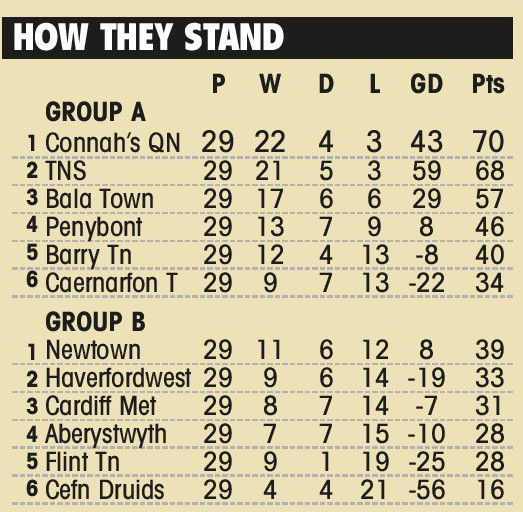 “Wednesday at Bala was a game too far for the team, said Nomads boss Andy Morrison. “I’ve asked a lot of them and they have given everything. But we’ve now got six players out for the season with injuries. I know they are ready to carry on, be brave and get back on the front foot in everything we do.

Anthony Kay gave them the lead on 10 minutes when he headed home Herny Jones’ corner, but Barry were back on level terms a minute later when Nat Jarvis headed home.

Venables then notched his first on 34 minutes when he made home keeper Lee Idzi pay for an error and his second came when he beat the offside trap on 50 minutes to score from a tight angle. That took him to 200 goals in the top-flight and a fourth merely confirmed Bala’s entry into European football next season.

A 95th minute equaliser for Caernarfon Town to make it 2-2 at home against Penybont meant Bala cannot now be caught in third place. It was a case of many happy returns to The Rock for James Davies as he came off the bench for Newtown to hammer home a 14 minute hat-trick against his former club in Play-Off Conference leaders Newtown’s 7-0 win over Cefn Druids.

By the time Davies entered the fray, his side were three goals to the good. Nick Rushton made it 1-0 with the opening goal just before the break and then Alex Fletcher then grabbed the first of his brace three minutes after the re-start.

Fletcher struck again on the hour mark with a delightful shot into the top corner before Davies got to grips with the game. The Druids fell apart after the Fletcher goal and that allowed their former team mate to strike.

Davies scored three minutes after coming on from Jamie Breese in the 67th minute, forced Aaron Simpson to turn his cross into an own goal three minutes later and struck again in the 76th minute. His hat-trick came on 84 minutes to move well clear at the top.

Cardiff Met moved into third as they overtook Aberystwyth Town thanks to a convincing 5-1 home win. Matthew Chubb set up Eliot Evans for the opening goal in the seventh minute to make it five goals in five games. Then Ollie Hulbert got the first of his two to make it 2-0 at the interval.

The students have been in fine form of late and they powered on to make it six games without defeat with further goals from Emlyn Lewis, Hulbert again and Liam Warman. Hulbert’s second made it six goals in his last four outings.

In the other game in the Play-Off Conference, Flint Town United inflicted more pain on Haverfordwest County as they beat them 2-0 at home.