CAPTAIN Anthony Malbon has one aim for the new season – to get Kidsgrove Athletic into the play-off mix.

Malbon was part of the Kidderminster Harriers side which got to the Conference Premier Play-offs in 2012-13.

And now, after signing a new deal with the Staffordshire side, he has set his sights on repeating the feat in the new NPL Division One West shake-up – only this time clinching promotion.

“We want to finish as high up the table as we can and say I’ve had the opportunity to play in the play-offs with the club,” Malbon, the former Leek Town, Newcastle Town and Stalybridge Celtic striker told The NLP.

“I don’t want to finish in mid-table – that’s not me. Everyone at the club wants to make the playoffs. We’ve had our FA Cup run, so whether or not we do that again, I don’t know. 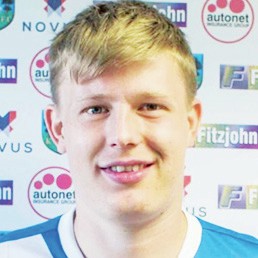 “I just want us to have that chance of playing in the play-offs again at the end of this season.

“Firstly, though, I just want us to all go out and have a full season. We don’t know what is going to happen and, that is mad to think about.”

Kidsgrove were a team renouned for their fitness levels in NPL South East lasy season and Malbon believes the effort put in during pre-season has made him a better player.

“I can’t wait for pre-season – I can’t wait for Tuesday and Thursday evenings to be running again,” he added. “Someone like me needed it. Yes, I’m a weighty guy. However, anyone who came to watch our games last year will tell you that I didn’t avoid my responsibilities.

“When the league finished, I was fitter and stronger and that is another reason why I was disappointed as I knew I was getting there. I had started scoring and, I was getting more match fit.”