HEARTFELT tributes have been paid after Spencer McCall lost his brave battle against cancer at the age of 26.

The popular midfielder played for Wingate & Finchley, Bishop’s Stortford, Harrow Borough, Hendon and Hemel Hempstead and his story had touched the hearts of many.

McCall fought off a rare bone cancer called Ewing’s Sarcoma in his leg in 2019 and was given the all-clear. However, in February last year he was given the devastating news the cancer had spread to his lungs.

McCall was forced to look abroad for treatments in Mexico and Germany. A JustGiving page raised more than £130,000 to help pay his medical bills as the Non-League family – and others – rallied to his cause.

However, the sad news of his death came through late this week. 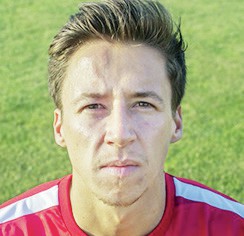 Wingate & Finchley chairman Aron Sharpe said: “Spencer was unique in every way. A throwback to a former generation; honest, modest, loyal and full of character. With the heart of a lion, he was always someone you wanted by your side.”

Hendon tweeted on Friday: “We are devastated to have learned yesterday of the passing of Spencer McCall at the age of just 26 after a long battle with cancer. A classy midfielder on and, more importantly, off the pitch.”

Hemel Hempstead said: “Spencer will be greatly missed by everyone who knew him – we have lost a truly special person.”

Bishop’s Stortford said: “Our thoughts at this desperately sad time are with Spencer’s family, friends and everybody in the football family who had the pleasure of knowing him.”

Harrow Borough said they had received the news with ‘great sadness’ and added: “Our deepest sympathy is sent to his family and many friends.”