Earlier this year the 61-year-old was diagnosed with the incurable Multiple System Atrophy (MSA), a condition closely associated with Parkinson’s disease but with rapid deterioration of never cells in the brain.

A Stevenage XI led by England C boss Paul Fairclough will take on a Barry Fry Barnet XI at Borough’s Lamex Stadium next Sunday with funds split between specialist care for Gittings and the MSA Trust.

Gittings is Stevenage’s all-time record scorer with 217 goals across four spells for Borough, including 44 in 1991-92 when they won Isthmian League Division One. He surpassed 200 goals in their 1993-94 Diadora League Premier Division title campaign.

Former team-mate and friend Trebble says it’s the least they can do to help the much-loved striker.

“It’s a very rare condition,” Trebble, who has organised the game along with Nugent, told The NLP. “It shocked him, as you can imagine, because he was a very active person, a gym regular. Now he’s got no movement in one side completely and, essentially, just in his left arm and his head.

“I played with him for only one season and then I went professional. But I also worked with Martin for years. I had a training company and we worked with disadvantaged kids all over the country setting up training centres.

“He went to the careers’ service after that, was part of a recruitment company that specialised with youngsters. He had a real passion for it and he was very good at it.

“He had a prescence and charisma that really turned youngsters, especially young men, who needed positive influences. 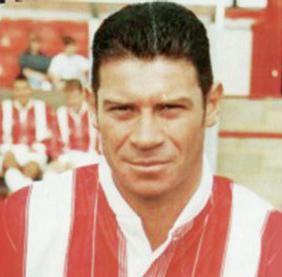 “He was a real influence on a lot of kids who went onto better themselves. I’ve got so many stories of him ironing their clothes for interviews.

“That belied what a lot of people viewed him as – because as a footballer, when we played together, I couldn’t stand him !”

Trebble says Gittings’ ways on the pitch made him the striker he was – even if it led to the odd flashpoint!

“We played Grays in midweek once,” Trebble said. “I was awful and just about to be subbed. Then I scored. Then I scored three more in 15 minutes. We won 6-1. He came in at the end of the game, chucked his boots and had a go at everyone for not passing to him. It all kicked off in this little portacabin.

“The following week we played Hendon at home. We lost 4-1 but he scored. He came in, sat down and said, ‘Well, I did my job’. It all kicked off again! It was unreal. But once I got to know him, he couldn’t be further removed from that.”