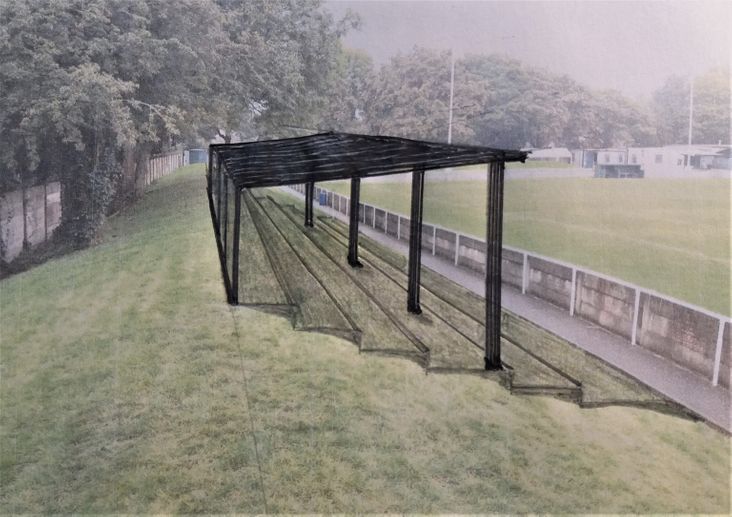 BetVictor Northern Premier League Trafford have secured funding for a new stand but it won’t be built until next summer because of the coronavirus crisis.

The Trafford FC Supporters Club topped up a £2,000 grant from the Manchester FA’s “Fund4Football” this week for a new stand at Shawe View, pictured.

Officials preparing to celebrate the NPL North West Division club’s 30th anniversary this summer say skilled fan volunteers will be ready to carry out the work once the COVID-19 public health crisis is over.

Supporters Club secretary Pete McGrath said: “The plan remains to build the terracing this summer, but of course, we can’t go ahead with the current Covid-19 restrictions in place and no one knows when we might get back to normality. We’ll just have to wait and see if it’s still feasible.

We would like to wish all of our amazing #TraffordFamily a very happy & peaceful Easter. It’s not quite the one we had planned but we hope everyone is keeping safe & well & we can’t wait to welcome everybody back to our lovely little oasis that is Shawe View. pic.twitter.com/AGtY3bsM5N

“In addition to the end of the lockdown, carrying out major building work like this obviously needs a window of opportunity where there’s nothing happening at the ground for a decent period. That only happens for about 6 weeks in June/early July, so if we do miss it we’ll just have to build in 2021.

“We always planned to do the terracing one summer and the steelwork/roof the following year so everything just shifts along 12 months. It’s one of the many unfortunate effects of this virus, but compared to what some people in the world are having to deal with, ours is a trivial problem.”

Without the new stand at the Pennybridge Lane end of the ground, the area would have been largely out of use following new FA ground-grading criteria banning grass embankments being used by spectators.

McGrath added: “It’s become more pressing since the ground regulations were tightened up and the grass bank at that end of the stadium was made out-of-bounds. We’ve never had any issues with spectators on the embankment, but it clearly isn’t ideal so the sooner we get the terracing in place, the better.”

The Northern Premier League’s season, along with those of all leagues at Steps 3 to 7, were terminated by the Football Association two weeks ago. The decision, which was ratified by the FA Council this week, sparked huge controversy after the campaign was declared null and void with no promotion or relegation below Step 2.

Make sure you get your copy of The Non-League Paper from this weekend for all the latest news in one place on the impact of the coronavirus crisis on football with clubs in the National League’s three divisions set to vote on the outcome of their seasons within days.