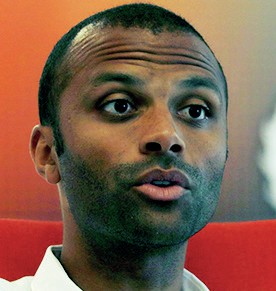 FORMER Grays Athletic striker Maheta Molango has become one of the most powerful bodies in English football after being unveiled as the next chief executive of the Professional Footballers’ Association.

The 38-year-old Swiss national emerged as the surprise replacement for Gordon Taylor, who is to step down after 40 years in the role at the end of the season.

The shock decision was confirmed on Tuesday after a recruitment process conducted by an independent advisory panel selected Molango ahead of a number of candidates including the PFA’s current chairman, Ben Purkiss.

Molango’s appointment comes aftrer rising concern among black players and members of the PFA that not enough had been done at the beginning of the recruitment process to ensure diversity among candidates for the job.

He now becomes one of the most senior black figures in the game.

Molango started his career at Atlético Madrid before moving to England 15 years ago, joining Brighton & Hove Albion and turning out for the likes of Lincoln City, Oldham Athletic and Wrexham on loan. He moved to Grays in 2007, making a handful of appearances before moving to Spain.

After his retirement, he retrained as a lawyer before being appointed as the chief executive of Real Mallorca in 2016.

Molango oversaw two promotions and a return to the Spanish top flight in his four years at the club, before he was sacked from the role last year after a string of bad results in La Liga.

In a statement confirming Molango’s appointment, the PFA said: “The PFA players’ board unanimously approved the proposed candidate, and the PFA will now look to finalise terms and formalise the appointment.”