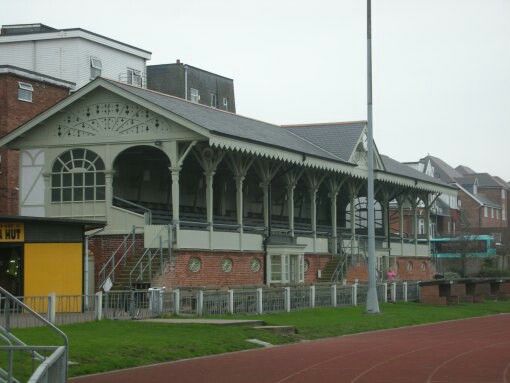 My lifelong passion for football has taken me, so far, to a total of 2,365 different grounds to watch matches. Every venue at Non-League level has a distinct personality.

In effect, that matchday ambience is aided and abetted by those hard-working volunteers who lovingly maintain the facilities at their local football clubs.

RICHMOND TOWN, FC EARLS ORCHARD PLAYING FIELDS, RICHMOND: This is certainly the most picturesque ground I have ever been to as it is etched against the base of a 950-year-old castle. I began the day on May 11, 2013 by touring the castle, where I was able to enjoy panoramic aerial views looking down on Richmond Town’s pitch. I then descended to watch the host team beat Ashbrooke 3-2 in a Wearside League fixture with the incredible backcloth of medieval fortifications dominating my sightlines. I understand Richmond moved to a new ground earlier this season, but Earls Orchard is still used by their reserve and youth teams.

GREAT YARMOUTH TOWN, WELLESLEY RECREATION GROUND, GREAT YARMOUTH: A venue that features the oldest surviving grandstand in English football. Built in 1892, the aesthetically brilliant structure currently holds Grade 2 Listed status. I was part of a huge crowd of 4,552 that packed into the Wellesley for a 1-1 draw against VS Rugby in the FA Vase semi-final second leg on April 2, 1983. I can still recall the bizarre public address announcement made that day by a distinguished-looking elderly gentleman with a handlebar moustache and clipped military tones. In a bid to quell some serious fighting in the crowd, he yelled: “Come on you chaps! Behave yourselves! When you get to my age, you’ll make love not war. And you’ll enjoy it too!”

HERSHAM FC, DESBOROUGH ISLAND, WALTON-ON-THAMES: I stumbled across this ground by accident at the start of the current season having read an obscure reference to it on the internet. Much to my delight, I discovered that Hersham of the Surrey County Intermediate League (Western) play on an uninhabited man-made island in the middle of the River Thames. So, on August 8, 2020 I drove over a small road bridge on to the island and watched the home side lose 3-1 to Sporting 50 FC in a pre-season friendly. Incidentally, Desborough Island was the setting for the 1983 video of Culture Club’s ‘Karma Chameleon’ song.

STONEHOUSE TOWN FC, OLDENDS LANE, STONEHOUSE: I went to Oldends Lane on May 6, 2014 and it resembled a museum showing what football grounds were like 100 years ago! Two extremely rickety old stands along with a dressing room block that housed seemingly pre-historic communal showers. The match finished Stonehouse Town 3 Lydbrook Athletic 2 in the Gloucestershire Northern Senior League. Stonehouse have since spruced up their facilities enormously to help win promotion to the Hellenic League.

PHOENIX FC, FELTHAM YOUNG OFFENDERS’ PRISON, MIDDLESEX: I got special permission to go inside Feltham Prison to watch a match between inmates team Phoenix FC and Hanworth Villa Vets in the Heathrow Airport Midweek League on December 21, 2011. I had to meet the referee and the away team in the car park an hour before the game. We then had to pass through four different airport-style security procedures before reaching the pitch. This was surrounded by a very tall barbed wire fence. Phoenix won the match 2-1 and I formed the entire attendance of ONE! There was another hour of security checks on the way out.

PELICAN FC, BRIAN WAKEFIELD MEMORIAL GROUND, NOTTINGHAM: The only world record for groundhopping was set on March 20, 2004. I joined 250 other football fanatics to watch five matches at five different football grounds in one day in the Central Midlands League in the Nottingham/Derby area. The schedule read: 11am at Greenwood Meadows FC, 1pm at Pelican FC, 3pm at Dunkirk FC, 5:30pm at Sandiacre Town FC and 8pm at Graham Street Prims FC. This is listed in the Guinness Book of Records and we received certificates confirming the world record after the fifth game. I remember having a huge row with my girlfriend of that time because she wanted to go back to our hotel at the end of the second match at the Brian Wakefield Memorial Ground where Pelican lost 2-1 to Dinnington Town. But I told her there were three further matches to go and we had to complete the world record. She subsequently disappeared in a taxi. Strangely enough, that was the last time I ever saw her.

ST MARTINS AC, BLANCHE PIERRE LANE, GUERNSEY: This is where I witnessed my all-time highest-scoring match on June 30, -2003 – Isle of Wight 20 Sark 0. It was part of the Island Games, which is like a mini-Olympic Games for small islands around the world. Sark, of the Channel Islands, only have a population of 600 so they did well to get a team together. Their centre-half was 55 years old and the goalkeeper was only about 15, but he made a string of maybe 50 outstanding saves to prevent a world record score.

HEXTON FC, THE RECREATION GROUND, HEXTON: A hidden gem! I went to this venue in Hertfordshire on April 21, 2013 for Hexton 4 Bushmead 1 in the North Home Counties Sunday League Division Three. The main reason for my visit was to sit in what is reputedly the smallest purpose-built grandstand in English football. It holds three people! A plaque reveals that it is called the ‘Crimbo Memorial Stand’ and was built in memory of club member Steven Christmas who died in 2001. Hexton have since changed their name to Hitchin Ravens FC.

FC UNITED OF MANCHESTER, BROADHURST PARK, MANCHESTER: I chalked up my 2,000th football ground visited on August 31, 2015 at FC United of Manchester 3 Curzon Ashton 3 in the National League North. I loved the fact that the FC United fans (as co-owners) had designed the stadium themselves. So they included a big covered terrace behind one goal and a standing paddock in front of the main stand to mimic the original design of Old Trafford.

HENDON FC, CLAREMONT ROAD, CRICKLEWOOD: This was my local team when I was growing up. Indeed, I spent many happy childhood days at Claremont Road as I fell in love with Non-league football. It was a safe and friendly environment for a young lad like me. Claremont Road featured a homely wooden grandstand, a long covered enclosure opposite and excellent terracing. Sadly, it has since been demolished along with most of the other traditional Non-League grounds within the M25 in London.