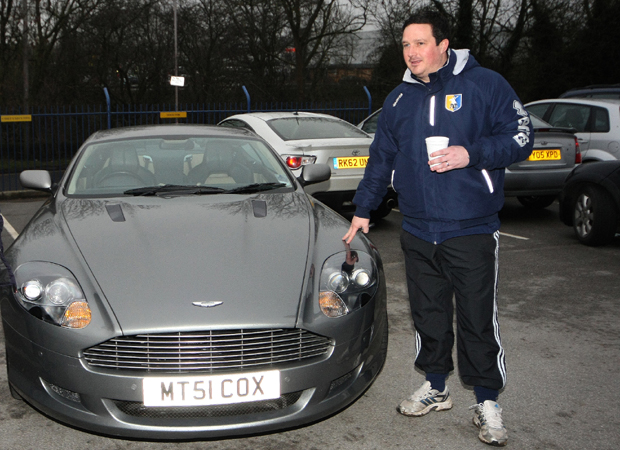 THE picture is typical Paul Cox. “What you see is what you get,” says the boy brought up in Nottingham’s toughest inner-city suburbs.

Mansfield Town tracksuit and trainers are standard. The car next to him, a 2011 Aston Martin DB9 worth £80,000 handed over by multi-millionaire chairman John Radford at halftime of last Saturday’s game with Barrow – hence the  polystyrene cup of tea still in hand – is certainly not Paul Cox. He is no James Bond.

Drive an Aston Martin around Nottingham’s Hyson Green, where he was born 41 years ago, or Bulwell and Bestwood,  where he grew up, and “the police would be stopping me every 100 yards thinking I’m one of the local big boys”, laughs Cox.

The ex-Eastwood boss is more Aston Villa than Aston Martin; a down-to-earth football man embarrassed by the media spotlight that followed the 8-1 win, with Radford giving his manager his old motor midgame because the 5-1
interval score matched its new number plate.

“I get on great with John,” he says over a sandwich – plain old cheese and onion – in the swish Il Rosso bar-restaurant round the corner from Field Mill.

“We’ll come in here, have a pint and he’ll give me a bollocking when I need one.

“The car is a brilliant gesture. I use the word ‘surreal’ – and that’s what it was at half-time last week. 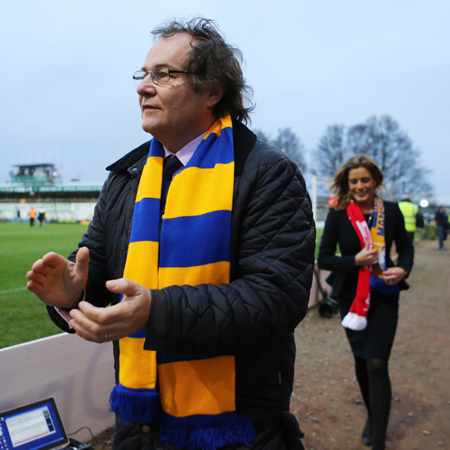 “I’ve got a two-year-old girl and a baby due in June and I’m now trying to find car seats that are going to fit in the back of it. We’d been joking about a new car but I was thinking something a bit more practical! I’m not in the game for money. If I became a multi-millionaire I don’t know what I’d do.

“You can’t take materialistic things with you, but you take experiences. I say to people here that the booing we’ve had  at games this season is a good thing for me because it’s an experience in life that I haven’t had before, and it’ll make me a better person.”

Cox has been through a lot to make him that. After finishing playing professionally with Notts County – and  subsequent stints with Kettering (twice), Halifax and Ilkeston – with nothing to show for it, it would have been easy to  turn to crime.

He credits another John, his former Hucknall and Leek Town boss Ramshaw, for “putting me on the straight and  narrow” when underworld associates were starting to tempt him around the turn of the century.

“I’d finished playing and I didn’t have a pot to p*** in,” says Cox. “I was renting a sh**y little one-bedroom house in Basford, doing some security work at the magistrates court then cabbying.

“I got held up in my Vectra one night and had a knife stuck to my throat. Things were starting to go the opposite way. I   had people in my ear who said ‘Come here, we’ll look after you, here’s a bit up front’. I’ve always been honest and done things right.

“I’d split from my ex-partner, the mother of my eldest Aaron, who’s now 18, but she was my sanctuary because she’d say, ‘Don’t Paul, you’ve got your little boy, you’re a footballer’.

“And it was John, too. I owe him a lot. You have turning points in life and he got me coaching the academy kids at  Hucknall in the morning, unpaid, and he’d test me to see whether I’d do the penny jobs, like replacing divots on the pitch, as well as the pound ones.

“John took me to Leek as his assistant, and pushed me into teaching as well as coaching.”

Cox taught at Nottingham’s Castle College and moved back there football-wise as No.2 to Bryan Chambers – another “great influence” – at Northern Premier League Division One Eastwood, in 2003, becoming manager two years later.

Roles would be reversed as Ramshaw assisted him during the Badgers’ rise to the top of Conference North – and FA
Cup third round in 2008-09 – before he took over at Mansfield in the summer of 2011. 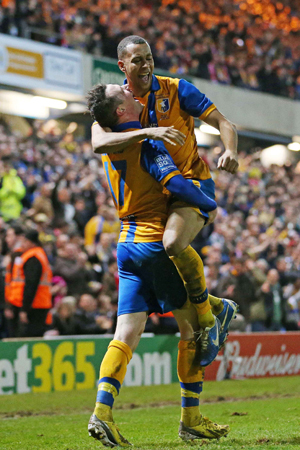 He’d also worked with wife Natasha – who he wed at Field Mill two days before the Stags took on Liverpool in the FA Cup last month – helping disengaged children.

“I’d get a knife pulled on me three times a week there as well,” he smiles, “but I could associate with them.”

Life at the sharp edge of Conference football, trying to build on last season’s third-place and play-off semi-final defeat, had prompted speculation of interest from League One Notts and Oldham, but that won’t affect Cox.

He says: “I want people to say ‘He’s not bad at his job and he gets results’. People might have a pop at how we play,  but I’d rather be known for that than being 007.

“People have told me to put a shirt and tie on on the touchline, but I’m not an Armani suit person. It’s my place of work,  I come in and it’s p*****g it down with rain, and it’s the way I am. If that holds me back, so be it. “I love my job, but you never know when you’re going to get sacked and if I did, I’d stay involved in football for nothing. It’s a drug, I love the thrill of the chase.”

Cox’s teams are renowned for good second half of the season form. The usual chase could lead him into the Football League this summer, but you won’t see him chasing jobs up there in his new motor.

“I’ve had calls from people saying I’m the last person they’d expect to see in an Aston Martin. I’ve even had a little chuckle to myself, thinking ‘You must look a right plonker’.

“But I have a philosophy in life and football, and it is ‘A patient man rides a donkey’. You might not be in a flash car, but  you will still get to your destination, just at your own pace.”

There you have it. Radford could have given Cox an ass rather than his old Aston, and he’d be just as grateful!