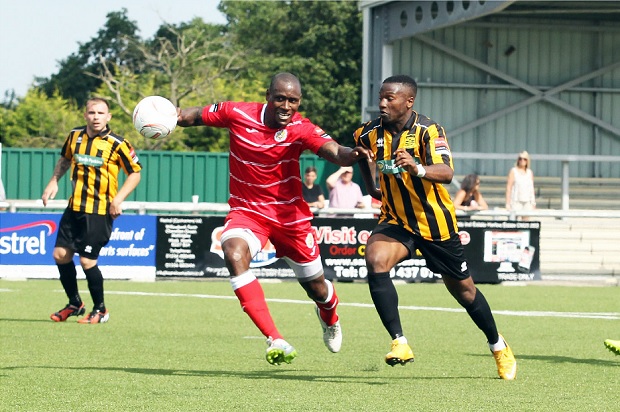 IBRAHIMA SONKO is the Non-League signing of the summer according to Harlow Town boss Danny Chapman – but he thinks the former Reading and Stoke City defender will be back in the Football League before the end of the season.

International clearance came through on Thursday so the 34-year-old ex-Senegal international could play in the Hawks’ Ryman Division One North opener against Cheshunt on Saturday.

Sonko helped Reading win promotion to the Premier League in 2006 and was later bought by Stoke City for £2m.

For the last three seasons the former Portsmouth and Ipswich Town man has been in Turkey with Akhisar Belediyespor – and Chapman knows Harlow are lucky to have him.

“If I’m being honest, I don’t think we’ll be able to keep him until the end of the season,” Champan told The NLP.

“I know he’s good enough to play back in the Football League and I think it will be a matter of time.

“But in the meantime he’s helping us with his experience and the player he is, and we’re helping him because he’ll be playing games.

“It’s not an off-the-cuff thing. We know him, plus he’s played a few pre-season games and he’s been training with us for most of pre-season.

“He’s not come in with the attitude of ‘I’ve done this and that’. He’s a proper fella and has mixed in with the lads really well.

“Just the calibre of player he is, I doubt there’s been a better Non-League signing this summer.”

Chapman says strengthening the defence was the priority this summer after last season missing out in the play-off semi-final to Thurrock despite finishing runners-up to Needham Market with 103 points.

“We needed to strengthen the backline because that’s where we fell a bit short last year,” Chapman said.

“We’ve done that. We’ve signed Sam West as well as Sonko, so our backline looks good.

“People talk about last year and I’m fed up with it. It’s gone. Yes we had 103 points and scored 108 goals, but we lost in the play-offs so we didn’t actually achieve anything.

“It’s a new season. The league is as strong as it’s ever been but we’ll start the way we start every season in respect our aim is to win the league.

“Once we get to Christmas we’ll reassess again and maybe have a new goal. But, for now, it’s about winning the league and getting promoted.”