Hats Off As Wayne Bows Out As A Legend 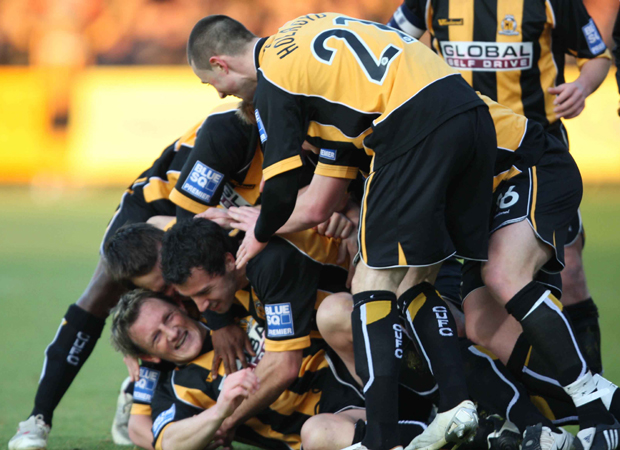 IT WAS appropriate for Wayne Hatswell to announce he was hanging up his boots on FA Cup first round weekend, exactly 12 years after his name first came to prominence on Match of the Day.

Gary Lineker and Alan Hansen laughed their heads off when Hatswell, playing for Forest Green against Morecambe at the Old Lawn, lashed an attempted clearance into the stanchion of his own goal. It would be replayed every time an OG came close to matching it for craziness.

He won’t thank me for bringing it up again, but I hope Hats – as the popular defender is known throughout Non-League – still has that left boot in an old kitbag in the garage of his Kidderminster home.

It might fetch some decent money among Rovers fans in a few years when, they hope, the Nailsworth outfit are a prospering Football League club!

Seriously, the 37-year-old may not have been playing in the competition proper last weekend, the Brackley Town side he’s helped to the top of Blue Square Bet North not involved after losing at Arlesey in the second qualifying round.

But it is apt because that moment, even though it cost his side at the time and has brought him a career-load of stick in the dressing room ever since, helped Hatswell make his name.

He was already in his mid-20s and had served a hard-knock part-time apprenticeship in the Hellenic and Southern Leagues by the time Frank Gregan gave him his Conference chance.

Subsequent managers saw through the laughter and spotted the talent that lovely left-foot contained either at centre-half or full-back, and made him a cornerstone of top Conference and lower Football League sides.

Until last season, when his role was mainly on the coaching staff at Newport County, Hatswell had not played less than 40 games in a campaign since 2002-03.

He helped Chester to a play-off semi-final, Cambridge to two successive finals and last season played a crucial role as the Exiles saw off Wealdstone to reach Wembley in the FA Trophy final.

He has scored spectacular goals – 40-yard free-kicks and 35-yard volleys against Barrow and Histon for the U’s spring to mind – that far eclipse the one into his own net that propelled him into the spotlight.

But with his 38th birthday approaching, the ex-England C captain decided to call time and concentrate on his role as assistant head coach to Ian Sampson at the Football CV academy based at Corby’s Steel Park.

The UEFA A Licenced coach explains: “We’ve got 26 lads who we look after and I love it. I also work for the FAW on a Sunday mentoring people studying for their Level 2 badge, so something had to give. I don’t spend enough time with the wife, and I think I owe her a little bit really.”

When he went to be player-coach at Irish side Dundalk in 2010, Suzanne was left to sort out their imminent wedding. “She’s probably had to go to ten weddings on her own because they’re on Saturdays – in fact the only one I turned up with her was ours!” he laughs.

“It’s time to spend a bit of time with her but saying that, I managed to fit in two games last week with the second half of Kiddy against Oldham and Oxford v Dagenham on Tuesday night, so she won’t be seeing that much of me.

“I’ve had a couple of offers to keep playing, but I don’t think it is going to help me going down the coaching route.

“I felt that Brackley are in a good position now, they’ve got plenty of strength in depth and I didn’t want to get to the point where everything was catching up with me and I was letting myself and everyone else down.

“It was either going to be now, or I’d drag it out until the end of the season – and I’m not like that.”

He adds: “There are a few centre-forwards going to be sleeping a bit easier now, aren’t there? My hit-list is complete – I’ve got everybody!”

He is joking, of course, because modesty is what has made Hatswell so well-liked at whichever club he’s been at.
Last season the Cambridge fans gave him a standing ovation as he entered the action at the Abbey as a second-half Newport sub.

That doesn’t often happen to a visiting player, but like the U’s fans that night, I doff my cap to Hats – a man who worked his way from ridicule to ride high in my list of Noughties Non-League legends.

Taxi For Jermyn? Not On Dorch’s Big Day!

LAST Sunday I was part of ESPN’s team covering Dorchester’s deserved 1-0 FA?Cup win over Plymouth Argyle – the first time the Magpies have ever beaten a Football League club.

The weather was filthy at the packed out Avenue Stadium, some of the tackles even dirtier. Indeed, the Pilgrims’ midfielder, Conor Hourihane, could have walked for the third minute challenge that deserved more than yellow, even before ref Lee Collins amazed everyone by showing a second – then red – for taking a ninth-minute free-kick too quickly.

But ex-England internationals Peter Reid and Martin Keown were hugely impressed with the work-rate, endeavour, technical ability and composure the Blue Square Bet South side showed.

To be fair, Reid sees what talent there is in the grass-roots game regularly. His brother Shaun manages Warrington Town and the ex-Everton midfielder often goes to watch the Evo-Stik NPL Division One North side. When in London, he says he goes to see Hanworth Villa play in the Combined Counties Premier.

Keown was especially impressed with the honesty on display, both in the game and the post-match interviews, like when Town captain Mark Jermyn suggested Hourihane “should have listened to the ref, shouldn’t he?”

I liked manager Phil Simkin’s brutal assessment of his 31-year-old skipper’s role in Jake Gosling’s winning goal, cutting Jake Smeeton’s deep cross back from the byline for the Exeter loanee to finish.

“He’s not as quick as he was,” Simkin told me, “but he did really well to get up there. I couldn’t believe it. I was just about to ring a taxi to get him back!”

Having been at Chelmsford’s win over Colchester the previous day, the Cup certainly cheered for me last weekend!