Posted on 27th September 2019 by admin in Latest News, Southern Leagues with 0 Comments 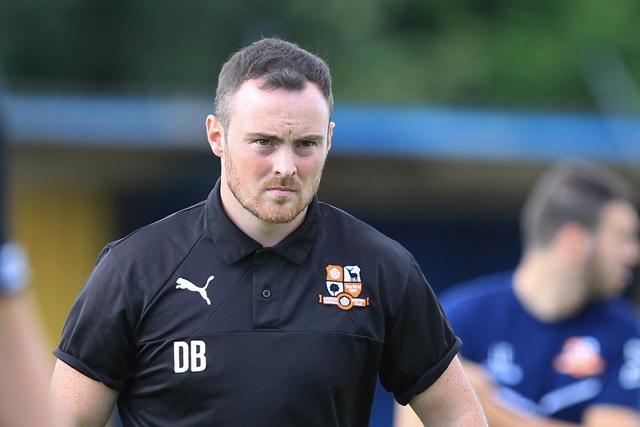 Dan Bownlie has finally got his dream job as Basingstoke Town manager after serving the last three Dragons bosses as their number two.

Brownlie’s appointment as the successor Martin Kuhl was confirmed on Thursday following a meeting of the Southern League club’s board.

After guiding Basingstoke to a creditable 0-0 draw at AFC Totton last weekend as caretaker to earn only their second point of the season, newly installed Brownlie heads to North Leigh with the Dragons in the FA Trophy on Saturday.

Brownlie, pictured managing Hartley Wintney where he enjoyed great success, spoke of his pride in a club statement as he prepared to take the helm on a permanent basis for the first time.

He told fans: “It’s a proud moment. I know how much this club means to people and it’s important that their ongoing support is rewarded with performances and of course results.

“It’s not going to be an overnight process but they can rest assured that we’ll be doing everything we can to turn a corner as quickly as possible.

“There’s a lot of hard work ahead of us – but I’ve every faith in this group in their attitude and focus, there’s no question about that.”

Basingstoke chairman Terry Brown said: “Dan knows the club, the struggles we are currently having keeping our club alive and kicking and most importantly he has a great knowledge of the standard of football that we are currently playing as a club.

“He has won honours at this level and since joining the club has been fantastic across all areas. We had some strong candidates apply for the role, but for me and the Board, Dan was the standout candidate and we are excited at where we believe he can take our fantastic club.”

He added: “Over the coming days, Dan will begin piecing together his backroom team. Until that is finalised, Academy manager Aaron Nicholson will continue to assist Dan as they look to build on the draw and clean-sheet they earned away at AFC Totton last weekend.”

Southern League Division One South Basingstoke insisted their parting of ways with Kuhl last week was “a truly joint decision” by both parties.

Appointed in November 2018 as the successor to Jason Bristow, the 54-year-old left with Town propping up the table, having amassed one point from their six league games before doubling their total at Totton under Brownlie.