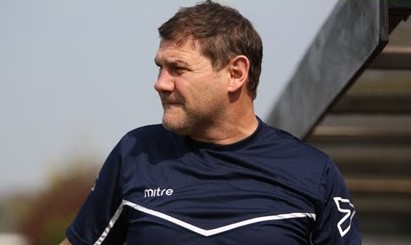 BetVictor Isthmian League Aveley reckon Chelmsford City will be more worried about meeting them than they are about pulling off another giant-killing after being paired together in Monday’s draw for the third round of the Buildbase FA Trophy.

After Monday lunchtime’s draw, Johnson told thurrock.nub.news: “All I will say is ‘They will be more worried about us than we will of them. It’s time to make even bigger history.”

Elsewhere, Royston Town boss Steve Castle, pictured, was telling fans they’d have the last laugh in the competition before being set up for another potential giant-killing.

3-0 winners over Chester on Saturday after dispatching Boreham Wood and Wealdstone in earlier rounds, the Crows were drawn away to National League Ebbslfeet in the third round.

The BetVictor Southern League club’s record run in Non-League’s showpiece competition has put the Crows on the map and Castle told the Cambridge News on Monday that it was “music to his ears”.

After a season of disparaging “never heard of it” remarks and references to the fictional town of Royston Vasey from the BBC cult comedy League of Gentlemen, Castle reckons they can’t lose as a club now, even if they do fall at the next hurdle and fail to reach the quarter-finals.

The Crows boss told the paper’s website: “I reckon they’ve all heard of us now. That’s music to my ears as that’s what we want as a club. We want to keep progressing and put Royston on the map.

“When I came here six years ago this club had probably never played as far north as Chester, and now we’re knocking an ex-Football League club out of the Trophy.

“We were step five not so long ago, but the way we’re going I don’t think we’d disgrace ourselves at the level above. We want to keep progressing, creating interest and drawing the crowds in.”

The third round proper is due to played over the weekend of Saturday 8 February with the victors collecting £6,000 in prize money and the losers £2,000.

Open to clubs from Steps 1-4, 296 teams entered the FA Trophy this season when the competition kicked off with 28 extra preliminary round ties on Saturday 28 September.

A place at May’s Non-League Finals Day awaits the eventual finalists in both the Buildbase FA Trophy and Buildbase FA Vase. The winners of the FA Trophy will leave Wembley with £60,000 and the losing finalists with £30,000.

For more information on the round dates, exemptions and prize money visit thefa.com.