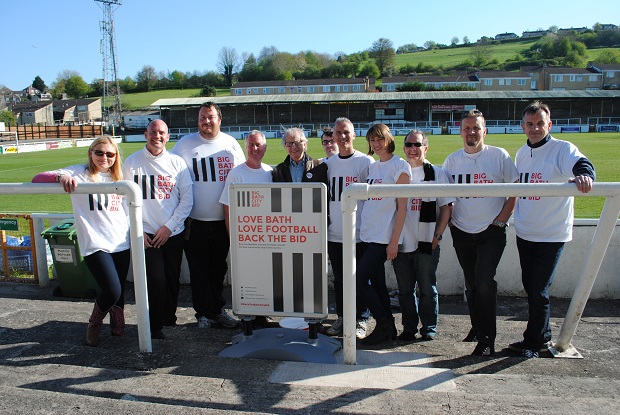 AS one of Britain’s best film directors Ken Loach is known for bringing social issues to light, so it’s no surprise he is now backing Bath City’s bid for community ownership.

A director of classics such as Kes, Cathy Come Home and more recently Looking for Eric, Loach – Bath’s most famous supporter – has always championed the working class.

He’s now part of the Big Bath City Bid which is aiming to raise £750,000 in shares to take over the Vanarama National League South side and make inroads into the club’s debt to ensure a bright future.

Despite being born in Nuneaton, Loach moved to Bath in 1974 and quickly became a regular at Twerton Park.

And now he wants his beloved Romans to follow in the footsteps of other Non-League clubs who have successfully turned to community ownership.

“After moving to Bath in 1974, Saturday’s just didn’t feel the same without going to a game so I was trapped just after that,” he told The NLP.

“Bath have had some very good teams over the years. There’s good people supporting it and a great atmosphere around the club.

“One of the big things is we need to increase the attendances and to do that we need to change the ownership model. If more people feel like they have a stake in the club, we have a broader base to draw from.

“We would look to work extensively across the community to really get the club’s name out in the city and touch people’s lives.

“I first met Andy Walsh (general manager) of FC United back when we were filming with Eric Cantona and what they’ve done is fantastic. It’s now up to us to make it happen for Bath.”

Over £90,000 worth of shares have already been snapped up with a September 4 deadline for the total amount to be raised.

Loach outlines the potential football in Bath has with the city already supporting a hugely successful rugby union side who made this season’s Premiership final.

“Bath is a wonderful place and it needs the football team to match everything else,” the 79-year-old, who has been involved in the club’s Supporters’ Society, added.

“There are a good group of players at the club and a good management team. It just needs bigger crowds and financial security.

“At one stage Bath only lost out on promotion to the Football League by one vote to Wigan. As many people were watching the football as the rugby back then but then rugby got the investment.

“The football club has got to move forward on all fronts in a sustainable manner. People are passionate about sport so the club can do so much for the city as a whole.”