Posted on 8th October 2020 by admin in FA Competitions/More News, Step 5 and below with 0 Comments 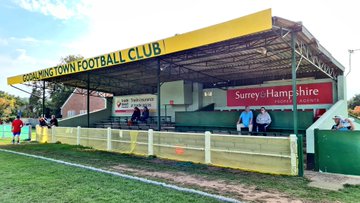 There’s a quiet footballing revolution going on at Godalming Town in leafy Surrey under the guidance of Phil Ruggles and his two assistant managers, writes Chris Amy.

Not known for its football club, the town sits halfway between London and Portsmouth in the desirable borough of Waverley with a population just under 22,000.

In fact, the only real football connection with the town is former England captain Mick Mills who was born and raised there. Mills won the FA Cup and the UEFA Cup with Ipswich Town as well as captaining England at the 1982 World Cup in Spain and playing 42 times for his country.

At Godalming Town today, where there is evidence of the ground’s previous use by Farncombe FC until 1970. Also, the main stand which was moved from Addlestone & Weybridge’s Liberty Lane when they folded in 1985. pic.twitter.com/8ZeldFYYml

The trio took charge of the club in time of the league game at Tooting Bec on 22 February, one of the final three games to be played before the UK went into coronavirus lockdown. All three were away from home and all ended in defeats against teams that were flying high in the league at that point – Tooting Bec, Kensington Borough and Farnham Town.

Assistant boss Roberts saw positives in the games against Tooting and Farnham, believing that The G’s deserved something from both games. When asked what type of football the management want to bring to Godalming, Roberts is clear.

“The management team is trying to bring a more attacking and exciting style of football to the club,” he said. “We have a lot of pace among our strikers and a lot of running among our midfielders, so we look to get the ballforward quickly and exploit that pace.

“We look to defend as a compact unit and get bodies back behind the ball. We are not conceding many goals but we are also yet to keep a clean sheet so there is still a bit of work to do there.”

The squad for the 2020-21 season consists of seven players retained from last season and sixteen new additions brought in over the summer. They are performing well in the league, having won three, drawn two and lost two of their first seven league matches and sit seventh in the table.

This is a real improvement on last season, when the club were rooted to the bottom of the table before lockdown began. Fortunately, the 2019/20 league season was considered null and void after the Covid pandemic wreaked havoc with the league schedule.

The G’s (as Godalming Town are affectionately known) compete in the ‘Bill Kyte Memorial Trophy’ with neighbouring Guildford City as the annual curtain-raiser. Godalming won the trophy on 29th August, winning 4-1 on penalties after the game finished 1-1 after 90 minutes. It was the perfect end to the club’s pre-season preparations that began in earnest as soon as the Government guidelines changed.

The squad were initially trained three times a week once they were allowed to train in ‘bubbles’ of six and the only disappointing result so this season has come in the FA Vase, with a defeat at home to Shoreham on Saturday 19 September.

The G’s fought back from 3-1 down to take the tie to a penalty shootout. Despite being full of confidence after their shootout win over Guildford City three weeks earlier The G’s luck ran out and it was the visitors who progressed into the next round.

The average attendance for first team games at the Bill Kye Stadium this season have almost doubled from last season, from 84 to 140. The youth team have an average gate of 76, with some of their crowds at games higher than some of Godalming’s rivals’ first team matches in the Combined Counties League Division One!

The G’s even have their own mini group of fervent support known as ‘The G Army’. The fans position themselves behind the goal and cheer on The G’s from the first whistle to the last. Their boisterous support gives an extra edge to the matchday atmosphere, which can be relatively quiet in this level of the Non-League pyramid.

Roberts has also noticed another vital change at the club, declaring: “There is a buzz around the club now and the fans are engaging with the club again – attendances have been much higher than last season’s average which is not surprising given that fans are still not being allowed in at Elite level.”

The new interest fits well into the plans of commercial manager Glenn Lye to get more of the townsfolk of Godalming through the gates at the Bill Kyte Stadium, named after the former club president who passed away in February 2018.

“Essentially I have been trying to create a community feel at the club,” Lye explained. “I’ve attracted many new local sponsors, as well as inviting supporters to sponsor the playing and coaching staff. I am pleased to say that all players and coaches are now sponsored – a great way to get the local community to invest in the club.”

He added: “The website has been completely revamped. It has been made more relevant, consistent, and more interactive. There is a new online shop on the website selling a variety of Godalming Town merchandise.”

With Lye and a gallant group of loyal volunteers helping out at the club, the future is certainly looking bright for Godalming Town. If you find yourself in the area when there is a home game on, it will be well worth a look – you never know, one of the local lads playing might go on to captain England at the World Cup in years to come!

Make sure you get your copy of The Non-League Paper every weekend for all the latest news from the FA, competitions, clubs and much more with the new 2020/21 season underway!

OUT NOW: Sunday’s NLP is always available as a digital edition 24/7!