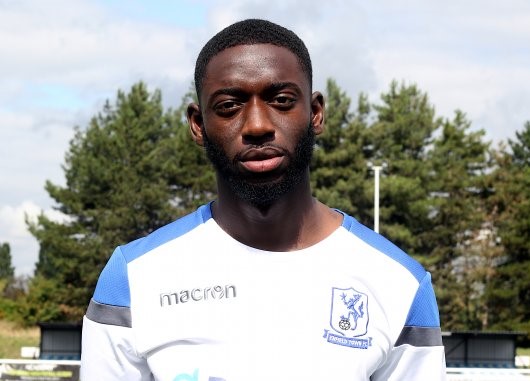 Enfield Town hot-shot Muhammadu Faal hitman has made one of the biggest jumps from Non-League since the transfer window opened by signing for Bolton Wanderers.

The prolific striker, pictured, has been spearheading Town’s promotion charge in the BetVictor Isthmian League’s Premier Division with 24 goals in 25 appearances this season.

After a series of moves for National League players, the 22-year-old left Donkey Lane on Monday to turn professional in League One.

Using his Twitter account, the new Bolton striker thanked fans and club staff for helping him secure his dream move.

Firstly, I would like to thank @ETFCOfficial coaching staff and boardroom for believing in me and allowing me to show my ability throughout the past year. I’ve enjoyed every single moment and I’ll miss the fans and the love they showed me.? pic.twitter.com/gPG8QcPSDV

According to statements released by the Towners, the former Kingstonian and Dulwich Hamlet star has signed an 18 month contract with Wanderers after appearing in a number of trial games for their U23s.

Enfield Town manager Andy Leese said: “After all the recent speculation, Mo has decided to take an offer to play professional football at Bolton and we are obviously delighted for him.

“We worked hard to get him to the club and to keep him here during the close season. We promised Mo we would assemble a team around him that would help get him a move into full time football and he, in turn promised he would deliver the goals.

“I hope he goes on to achieve what Josh Davison has done at Charlton Athletic. He’s been a great lad to work with, and now of course we need to replace his goalscoring ability. Not easy, but we are searching high and low to find the next Mo or Josh.

“The management team have asked the squad to step up and fill the void, and I am confident they will do just that. I’d like to wish Mo well; he’s earned his chance and I am sure he will take it.

“We speak most days, so I’ll keep everyone update on his progress. I know he will miss the incredible support you have all shown him during his time at the club; please keep that support going as we look to push on in a very demanding start to the New Year.”

Enfield Town chairman Paul Reed said: “On behalf of the club I’d like to thank Mo for his efforts over the past year; he’s been brilliant for us and I’m sure he’ll prove to be a huge success at Bolton.

“We’ve had a very honest dialogue in recent months, and I’m thrilled that he has achieved his ambition of becoming a full-time professional footballer.

“With Mo joining both Josh Davison and Rian McLean in securing moves to EFL clubs recently, we can be rightly proud of our role in developing exciting, young talent and full credit should go to our management team for identifying and improving these excellent players.”

Today football match prediction – If you’re ready for great odds, top tips and much more, look no further than 22bet.co.uk!