South Park’s Sparks are flying – just like on TV! 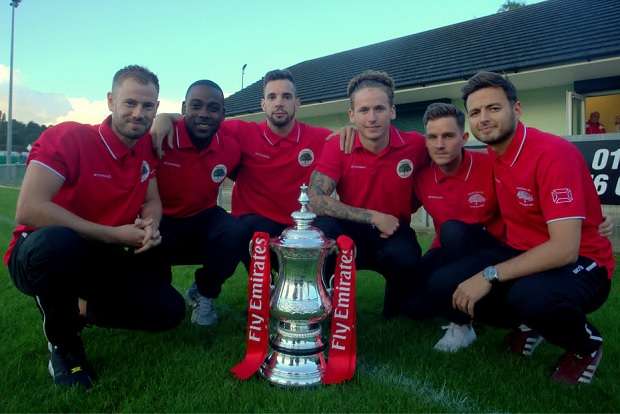 SOMETIMES it’s the most straightforward of questions which provoke the best of responses.

Impressed by the recent acceleration of South Park, one of the stars of last weekend’s FA Cup Preliminary Round, the subject of how long the club has been in existence soon arises.

“I’m not sure exactly but we’ve been around a lot longer than that bloody cartoon, I promise you that!” stressed joint manager Malcolm Porter, giving a fantastic impression of someone who loathes the infamously disgusting Comedy Central show. The truth soon outs.

“OK, I love it as well, I watch it and I’m 45 – but you wouldn’t believe the amount of people who turn up and ask if Eric Cartman is playing or if Kenny is in the team. They always think they’re the first to crack the joke!”

No idea what we’re talking about? Well unlike us you clearly have televisual standards. South Park is a grim, poorly-drawn American cartoon where filthy-minded children do unspeakable things and generally terrorise their town and teachers. So bad it’s good.

South Park are the kind of club where whatever little they can afford to pay their players goes straight back into the club over their bar after a game.

Known as the Sparks – it shouldn’t take you too long to figure out why – the Reigate club on the base of the M25 created some FA Cup electricity last weekend.

They hit the perfect ten, destructing Southern Counties East League Holmesdale 10-1 to ease through, and it’s Ryman Premier Leatherhead next on their hit list.

Remarkably, they had seven different goalscorers in the game – and every single one of them who hit the back of the net did so for the first time this season.

Their hat-trick hero, Karl Parker, scored the club’s first ever FA Cup goal in a match against Greenwich back in 2010 and the fact most of the squad have served them for so long is the answer to why they have risen from Step 6 to become a force in the Ryman South.

Porter added: “I think the strength behind what we’ve achieved since we were in the Combined Counties Division One a few years ago is that we’re a bit unique.

“We’re not a club who are hell bent on signing new players. Our primary focus is on keeping the ones we have and producing young ones. I’d say the majority of the players we have here now are the ones who were with us six years ago, and that shows because Karl scored our first ever FA Cup goal.

“The players naturally become friends, if they weren’t already before they joined. They get up to all sorts as lads that age do, and there’s a bond there because we’ve kept loyal with the original players who started our rise up the Pyramid.

“We do add new boys here and there but every time we do we make a point of welcoming them properly. At some Non-League clubs you may get one or two players drinking alone in the bar after a game, but not here.

“To a man they are welcomed properly and before long they’re just as badly behaved as the others and (joint manager) Dave Argent and I struggle to control them!”

South Park’s first qualifying round tie at home to Leatherhead will no doubt be a little more demanding, but Porter thinks they’ll get double figures again…. through the gate!

“It’s a home game which is what we wanted, it’s all you can ask for and it’s against a local team too, so there should be some interest,” he adds.

“They’ve got good support so hopefully it will capture the imagination and double our gates from five to ten!”