DAVE CHALLINOR doesn’t need telling how tense the play-offs can be.

The Hartlepool manager has been there, done it, and experienced all the emotions. From, Step 3 glory with AFC Fylde, then heartbreak in the National League final with the Coasters a year after missing out in the Eliminator, to back-to-back play-off successes with Colwyn Bay as a player and manager.

So it’s little wonder the Pools chief knows you have to embrace the occasion ahead of the do or die Eliminator with Bromley this afternoon.

“The reason you do it is to be involved in big games,” Challinor tells The NLP. “We’re almost gluttons for punishment aren’t we, in the fact they are season defining. They bring a huge range of emotions, but they are the type of games you want to be involved in.

“You’ve got to embrace the fact they are nervy and you’ve got to use the experience you’ve got to assist the players in trying to deal with the situation and hope you come out on the right side of the result.”

Embrace it will be a message for his players in the build-up as well as the Pools faithful, who are dreaming of a Football League return that, frankly, looked like it would be a long time coming until Challinor walked through the door in November 2019 and revitalised them.

It’s the toss of a coin. It can be the ultimate elation or the worst agony. 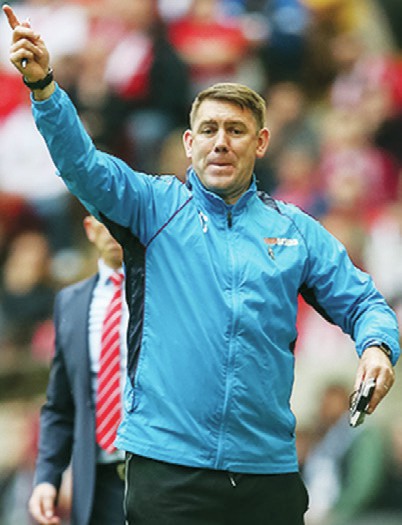 “But to be able to experience it and give yourself a shot of being the one to get through it is something we wouldn’t swap for the world.”

Challinor believes the extension of the play-offs to six teams has been a big success as his fourth-placed side go up against a Bromley side whose final day win against Notts County saw them jump into the play-off spots.

And with the home fans roaring them on, Challinor hopes that can make all the difference in what he expects to be a close encounter.

“It’s brilliant to have them back in,” Challinor says. “Our rescheduled game against Weymouth on the final day was the first time that six of our lads had played in front of our fans at our home ground. That’s a positive. They know what to expect now coming out onto the pitch and hearing that atmosphere and intensity of it.

“For a lot of the lads we brought in, playing in front of 4,000 fans and an unbelievable atmosphere in the ground was a selling factor.

“It would have been even more intense and exciting this season for the fact, for the first season in a long while, we’re up near the top competing and have got something palpable to play for.

“They have the opportunity now to do it in what are the biggest games of the season.”