SURPRISE PACKAGE:  Bromley have surprised many to make the play-offs under manager
PICTURE: Dan Westwell

The Ravens boss has overseen just one defeat in his 13 games in charge which culminated in securing seventh place last weekend.

They claimed victories at FC Halifax Town and Chesterfield plus decent draws on the road at Torquay United and Stockport County while beating Notts County and Hartlepool on home soil.

Bromley’s run-in has been gruelling but they’ve come through each test – even outdoing the expectations of Woodman. 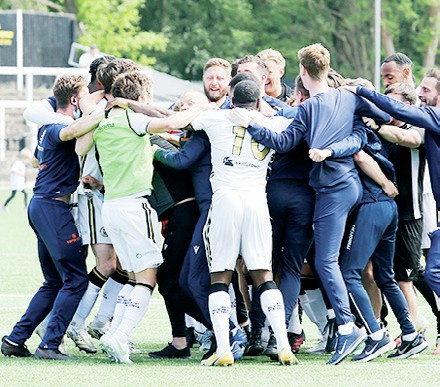 “It’s a team effort, the staff, the players have all bought into what I wanted which is half the battle and then the bigger half is delivering it. They’ve delivered that and more.”

Bromley snuck into the play-offs with a final day victory over Notts County, but were made to wait until Wrexham had failed to win at Dagenham & Redbridge.

Wembley to watch his son Freddie play for Swansea City  in the Championship play-off  final against Brentford.

“I knew Wrexham were losing and thought the game was pretty much done,” said Woodman who arrived for the match at half-time before Swansea went on to lose 2-0 to Brentford. “[The play-off final] was too big of an occasion not to miss although it wasn’t the outcome we wanted.

“I thought we were in [the play-offs], I didn’t realise Wrexham had scored and there was six more minutes left!

“I didn’t look at the tables or anything until after the game!”

Woodman met with Alan Pardew, the former Newcastle and Crystal Palace boss, the following day, who watched their win over Notts.

“He wanted to come and show his support, he’s someone I’ve worked with for 15 or 20 years,” said Woodman.

“He gave me some fantastic little pointers and tips, it’s nice to bounce off some managerial stuff with someone you know has worked at the highest level and will see some things differently.” 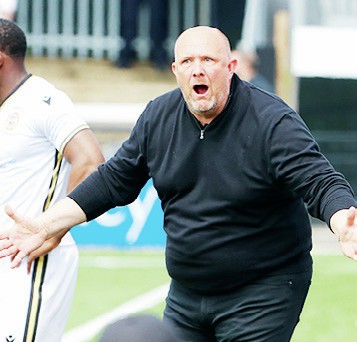 It’s Woodman’s higher-level experience that he’s tried to implement during his short time at the club.

“I don’t want to disrespect anyone here before me, I think the message was quite simple from the owner,” he said. “He wanted to have a club and a team with the same background ethos that I’ve come from.

“I’ve really brought a lot of that to the club, the preparation and the detail really has been the big thing.”

Woodman insists their preparation for Bromley’s huge clash today has been the same as any other – and won’t be reading into their win over Hartlepool just last month.

“We played them at a good time – they’d played on the Saturday and then travelled to us on the Monday,” he added. “We won’t be looking at past results or past encounters or who’s the bigger club or smaller club, we’ve just got to play our game.”

Meanwhile, talented defender Liam Vincent has landed a move to League One Portsmouth.