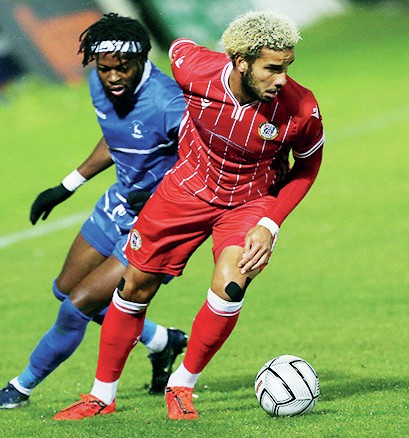 ROCK AT THE BACK: Bromley defender Chris Bush

IT’S often said that the team who enters the play-offs with momentum are the team to fear. If that mantra holds true then no-one should want to face seventh-placed Bromley in the end-of-season knockout.

Since Andy Woodman controversially replaced Neil Smith on March 31, the Ravens have gone on an extraordinary run that has seen them lose only once and keep seven clean sheets in his first 13 games.

That record in itself is impressive but when you consider that eight of those games were against direct promotion rivals it explains why Bromley are not a team to be dismissed lightly.

Alongside first- team coaches Alan Dunne and Roger Johnson, Woodman has made Bromley an exceptionally hard team to break down. Marshalled at the back by Chris Bush, Bromley have shut out Stockport, Torquay and Hartlepool this season.

Woodman has been keen to stress the complete adherence to the gameplan as the main attribute of his squad. Additionally, citing the meticulous preparation provided by Dunne and Johnson it is clear that Bromley have a squad and staff all pulling the same direction.

Then, factor in the National League’s top goal scorer in 21-goal Michael Cheek and it becomes clear to see why Bromley are always in with a chance. Former manager Neil Smith was rightly lauded for establishing Bromley as a solid top half National League club – but, arguably, Woodman has made them even better.

They may well be the smallest club in stature and profile in this year’s play-offs and given the ex-EFL heavyweights involved progression would be some achievement – but chairman Robin Stanton Gleaves is an ambitious man.

He has made no bones about his intention to get Bromley into the EFL and this has been clear through the massive overhauls off the pitch. Bringing in Woodman’s 15-year Premier League experience was about taking the next step.

It may be a historic achievement for Bromley to have made the play-offs but they will travel Hartlepool with no fear looking to execute a similar gameplan. None of Chesterfield, Halifax, Notts County, Stockport, Torquay or Hartlepool beat them in the last two months. Few would confidently bet against another upset.